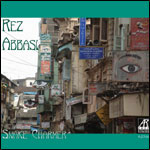 Los Angeles-raised and New York-resident guitarist Rez Abbasi states that "with my music I want to hold onto the the traditional aspects of each form (Indian music and jazz) and unite the best elements of both." The guitarist demonstrates prodigious chops throughout his fourth album, Snake Charmer, an eight-song, sixty-minute journey into jazz-rock fusion, grounded in Indian rhythms and ragas.

Typical throughout, as on the title track, the fleet-fingered Abbasi dances around the propulsive rock-like grooves of drummer Danny Weiss, and organist Gary Versace jumps into the fray. On "Pearl" (dedicated to slain American journalist Daniel Pearl) and "Rumi," guest soprano saxophonist Dave Liebman explores the outer realms, joined by the Indian-style singing of singer Kiran Ahluwalia.

On my favorite track, "Motherland," Abbasi and the band take the volume level down as Weiss' tablas lay down a steady rhythm, allowing Ahluwalia to vocalize with wordless vocals, producing a hypnotic and transcendent, almost otherworldly effect. She appears again on the closing "Thanks for Nothingness," with Abbasi playing acoustic guitar. Indeed, Ahluwalia's singing is the highlight of Snake Charmer and what prevents it from becoming just another East-meets-West musical exchange. The musicians in this tight group listen to one another, never getting in each other's way, and allow for lots of solo opportunities.