By John Kelman
September 29, 2009
Sign in to view read count 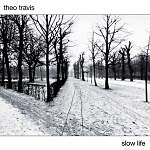 Between solo albums like Earth to Ether (33 Jazz, 2004) and Double Talk (33 Jazz, 2007), and working with progressive/fusion bands including Porcupine Tree, Gong, The Tangent, and Soft Machine Legacy, Theo Travis has become one of England's hardest working woodwind multi-instrumentalists. A fine player with a broad vernacular—blending the jazz tradition with a deeper understanding of the distinctively English sound of many of these groups—Travis would be a double threat if all he did was play his instruments and compose as well as he does. But Travis' Ambitronics—a soundsculpting array of electronics that allows him to create real-time layers inspired, in no small part, by King Crimson founder/guitarist Robert Fripp's Frippertronics and Soundscapes—makes him triple threat, capable of creating an entire aural landscape.

On the recent duo recording Thread (Panegyric, 2008), Fripp and Travis improvise freely and, by creating ambient washes of sound, challenge preconceptions of what their instruments can do. Released in 2003, Slow Life provides the chance to hear Travis' early days of electronic experimentation in a stripped-down context that focuses the spotlight on just how much Ambitronics can do.

Less about overt virtuosity, Ambitronics still doesn't substitute for instrumental mastery. If anything, the controlled improvisatons of Slow Life demand complete and utter command of Travis' instrument. Subtle extended techniques in the low register alternate with lushly constructed chords on "Love is Not Enough," while on "Stereo," Travis takes full advantage of his three-dimensional landscape to gradually build independent loops in the left and right channels, making it absolutely clear—as if previous tracks weren't enough to do so already—that Ambitronics is more than simple looping. Perhaps watching Travis in performance would help, but what becomes equally certain, as Slow Life progresses to the seemingly complex yet hypnotic closer, "Who Stopped You," is that it's a complex interaction of loops, reverb, harmonizing, and more, all managed in real time with the same degree of expertise required to play a conventional instrument.

The seamless integration of electronics—largely based on computer-driven bits and bytes so often associated with terms like "cold" and "clinical"—is catalyzing new instrumental voices for those intrepid enough to explore their musical possibilities. An ear-opening chance to focus on the broader potential of Travis' innovative Ambitronics, Slow Life is a calming but always commanding album that's never less than completely musical.