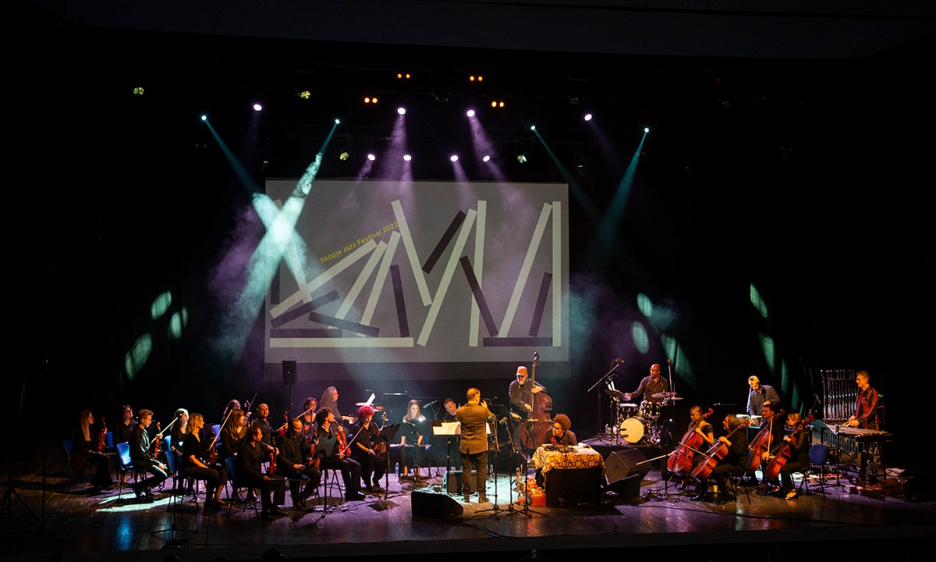 This the Skopje Jazz Festival does extraordinarily well—it gives an accent to music that is forward-looking, challenging, and exciting without looking back in the rear-view mirror. It also provides great support for local artists as they are able to show their skills and output alongside the international names on the bill. During the pandemic, some of them were front and center at the festival. The pandemic cast a long shadow but even during this socially isolating onslaught, the festival was the city's guiding light. For its 41st edition, the music at the festival was as varied as it was special, with this year's exclusive line-up consisting of Rob Mazurek joining forces with the cinematic Fames orchestra, Hamid Drake's Turiya, Amaro Freitas, Goran Kajfes Subtropic Orchestra, Thumbscrew}} orchestra, and Ingebright Haker Flaten Orchestra, but also domestic bands such as Zulu 3.4 and Taxi Concilium.

The festival started with the screening of the "Summer of Soul" documentary about the Harlem Cultural Festival of 1969. The documentary unearths a historic, long-hidden Harlem concert from the obscurity that laid languished in a basement for nearly 50 years after it was recorded. This historical event had taken place during the same summer as Woodstock and for 6 consecutive Sundays, outdoor celebrations of black music and culture had taken place in Harlem, NYC. It features performances by many great black artists such as Steve Wonder, BB King, Nina Simone, Mahalia Jackson, and Mavis Staples, to name but a few, in their prime. This documentary is essential for anyone loving music to know about those people who fought for their voices to be heard, including the voice of their communities, which in turn is essential in this increasingly divided world.

Chicago has long been a home for the experimental fringes of improvised music and over the years its scene has found its second home at the Skopje Jazz Festival when some of its renowned bands and composers have often played here, such as the Art Ensemble Of Chicago, Anthony Braxton, Muhal Richard Abrams, Roscoe Mitchell, to name but a few. Trumpeter and composer Rob Mazurek has already performed at the festival but with another project, the Sao Paulo Underground back in 2013. For this performance, Rob Mazurek's Exploding Star Orchestra joined forces with the Fames Orchestra, a heralded orchestra that made a name for itself in the world of cinema music. Both parties performed the music on Mazurek's Dimensional Stardust (International Anthem/Nonesuch) traveled the paths of the jazz cosmos that were previously traversed by the great Sun Ra and his Arkestra. What they played were tight and long orchestrated ensemble pieces that melded the gestures of avant-garde jazz and experimental classical music. In a way, these elements or constituent parts were wielded together in a unique blend that defied logic but the music sounded fresh, colorful, and exciting, and at moments challenging. The classical overtones and harmonies were seamlessly slipping into jazz and electronic music and vice versa, the jazz and classical easily slipped into improvising. The demarcation line was blurred or in most cases, it was non-existent. The opening night at SJF started on a high note with this challenging

Zulu 3.4's concert was part of the midnight concerts taking place at the Youth Cultural Center and usually started when the main program was over. Zulu 3.4 is a young and upcoming band with three albums on their belt. The trio consists of three young but versatile and adventurous musicians. The band was even awarded by the festival with a Golden Oryx for young talents. Their compositions grew into something far more abstract than you might think a guitar/keyboards/drum trio would be capable of pulling off and yet it pointed at late'70s soul jazz rock with glimpses toward an early phase of Leb i Sol and more. But all one has to do is to take a glance at the resumes of all three members to realize that the free-floating soul thing is a by-product of their hard work and inter-gigging. Obviously, for them, life is too short to be bored by predictable musical ventures. As a result, the music was accessible, dynamic, colorful, and soulful.

Hamid Drake's tribute to Alice Coltrane was one of the festival's highlights among many highlights and delights on the program. With the help of a stellar cast of musicians consisting of electronic wizard Jan Bang, pianist and keyboardist Jamie Saft, Pasquale Mira on vibraphones, trumpeter Susana Santos Silva, and Joshua Abrams on double bass, he unleashed music that was messy, soulful, complex, deep and utterly mesmerizing. The music had cosmic qualities but it was the blurring of the electronics and the acoustics that made this a special project. The ensemble certainly paid homage to Alice Coltrane and the golden age of spiritual jazz but it was their sonic range that was unparalleled and their vision was startlingly unique. In the middle of their performance, Drake sat in front of the drums and held a hand drum, and began a long speech about Alice Coltrane's importance to his life and music, including John Coltrane's music. He kept addressing her as Turiyasangitananda and stressed what she meant to him as a teenager in Chicago and that she was instrumental in him pursuing a career as an artist. It was evident with each new track that this collective was able to find its way in any situation, starting from a harmonic center, and then began pushing outward and upward. The key to this type of collective improvisations and music was in the players listening to one another as much as they played. What they were developing was their sense of purpose and direction collectively which in turn was a kind of spiritual experience right there.

Brazilian pianist Amaro Freitas is a supreme talent who has brought something unique to the table in the world of piano trios. In his music, channels the influences of pianists like Herbie Hancock or Thelonious Monk but he pays homage to the places, figures, and symbols of Black Brazil. Seated at the piano, Freitas cut an enigmatic figure in a bright and patterned robe and emanated calm in the slow melodies he created. Soon, the bass line provided a sumptuous, enigmatic opening that set the scene for the boundless musical exploration to come. And exploring and playing they did. Her performed selections from his latest album Sankofa (Far Out Recordings, 2021) The music was rooted in the jazz language but echoed his Brazilian background bolstered by Brazilian rhythms and centered on joy and community, it radiated positivity and youthful abandon. It was open to all kinds of spontaneous organic improvisations and departures.

Swedish trumpeter and bandleader, Goran Kajfes presented music full of keen listening, clever interplay, and good old-fashioned fun. The Subtropic Orchestra's music is actually an infectious jazz-funk that blends various global sounds such as Afrobeat, Ethio-jazz, and indie rock. The rhythmic work by the band's rhythms section was delicate and intense but fun and propelled the band and its band leader who cut the music with his dynamic trumpet solos.

The band Thumbscrew merges the talents of three versatile and amazing musicians—guitarist Mary Halvorson, bassist Michael Formanek, and drummer Tomas Fujiwara. Their performance was part of the band's 10th-anniversary celebration tour which they celebrated by releasing a new album titled Multicoloured Midnight. (Cuneiform Records, 2022) The band has its own distinct sound and its music can best be described as improvised chamber music. All of them had a telepathic bond and wonderfully merged their talents. What they gave accent to was the recently published new record. Clearly, each musician had an enviable technique and imagination and as writers, each has a knack for writing interesting and thought-provoking music. The trio performed a rapturous improvised conversation between guitar, drums, vibes, and double bass with undertones of chamber music.

There is a tradition at the SJF to close the festival with some of the most if not aggressive then the most distinct free avant-garde bands. The end show of SJF 2022 was Ingebright Haker Flaten's Exit. Flaten led a stellar cast of Scandinavian musicians from the worlds of improvised music, free jazz, noise, and contemporary music and the music they performed i.e. each piece was dedicated to a different city and it described the trajectory of the musician with a very particular feel. His compositions captured the spirit of cities such as Austin, Chicago, Mexico City, Oppdal, Trondheim, and Amsterdam. The music drew its inspiration from the worlds of jazz and avant-garde but not jazz as we know it. The ending result was an edgily free-jazzy group sound which really was imaginative contemporary music, with a hot free-jazz core.

The 41st edition of the Skopje Jazz Festival never strayed from its own concept which is the festival's own guiding light—showcasing music that challenges the norms of listening, music that broadens the horizons, and never looking back at what happened yesterday. The fact that most performances were well attended, with many sold out, says much about Skopje's post-pandemic craving for live music. This also suggests that SJF 2022 got the selection right by accentuating adventurous and challenging music that pushes jazz forward beyond traditional forms into uncharted territories.