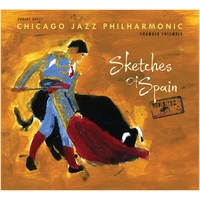 One by one, the trio of classic big-band collaborations by Miles Davis and Gil Evans is being rediscovered and reinvented by contemporary jazz ensembles: Miles Ahead, Porgy & Bess and last but not least, the tasteful and picturesque Sketches of Spain, reappraised here by trumpeter Orbert Davis (no relation to Miles) and the splendid Chicago Jazz Philharmonic. Besides composing, adapting and orchestrating the music, Orbert Davis sits in for his celebrated namesake on solo trumpet.

What makes these new Sketches especially intriguing is the fact that Davis has seen fit to retain the original album's opening and closing movements (Joaquin Rodrigo's "Concierto de Aranjuez," Evans' "Solea") but has replaced the middle three with a pair of his own compositions ("Muerte del Matador," El Moreno") and "El Albaicin," composed for piano by Issac Albeniz. At the risk of seeming perverse, a reasonable argument can be made that, rather than undermining the enterprise, these substitutions actually represent an improvement over the prototype. Blasphemous, some may allege, but the premise can indeed be debated.

There is, on the other hand, no doubt about the weight or staying power of "Concierto" or "Solea," which firmly anchor both the older and newer incarnations of Sketches. The former, governed throughout by Davis' bright, expressive trumpet, is a largely sedate and allusive tone poem, whereas the latter, introduced by the string section and Davis' radiant horn, evinces the spirit and sensuality of a Spanish dance (or two), an impression underscored by throbbing drums and clicking castanets. Davis' "Matador" is sober and unhurried, as befits its theme, his "El Moreno" more redolent of buoyant Spanish rhythms. "Moreno" also embodies the only solo aside from Davis, presumably by tenor saxophonist Steve Eisen, as he is the only tenor listed among the personnel. The classically oriented "Albaicin," which rounds out the session, is a charming showcase for the CJP's exemplary string quartet (two violins, viola and cello).

In sum, a laudable successor to the original Sketches of Spain, astutely conceived by Davis and expertly performed by the ensemble. Even so, the playing time is a scant forty-five minutes, slightly longer than the LP version but meager by CD standards, and thirty of those minutes are consumed by the "Concierto de Aranjuez" and "Solea." If you're a champion of Sketches, and that doesn't trouble you, the Chicago Jazz Philharmonic's singular portrayal is well worth seeking out.