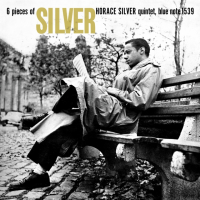 This 1956 recording by the Silver Quintet, featuring Hank Mobley on tenor sax and Donald Byrd on trumpet, is pure hard-bop heaven created by some of the masters of the genre. After spending the previous two years playing piano on some of Miles Davis' classic Prestige and Blue Note albums, and touring with the Art Blakey Quintet and the first edition of his Jazz Messengers, Silver was more than ready to step forward as a leader. His compositional talents had already been showcased with Blakey's groups, especially on 1954's "Horace Silver and the Jazz Messengers" (Blue Note), but "Six Pieces of Silver" was his his first chance to record with his own working quintet.

All six Silver originals are gems, including classics like "Senor Blues" and "Cool Eyes," and the ensemble playing throughout is outstanding, especially given the group's youthfulness—Silver is the elder statesman at twenty-eight; drummer Louis Hayes the youngest at nineteen. Silver's writing at this early point in his career is more solidly in the bebop camp than his later funk and soul efforts, but the blues, gospel, and Caribbean influences that are his trademarks are evident. His own playing is marvelously subtle, showing a clear debt to Powell and Monk, especially on slower numbers like "Enchantment" and the trio efforts "Shirl" and "For Heaven's Sake." Mobley's big, warm tenor is a particularly good fit with Silver's piano, and the young Donald Byrd shines on upbeat numbers like "Virgo." The rhythm section of Doug Watkins on bass and Hayes on drums provides excellent support throughout the session. The CD reissue, part of Blue Note's Connoisseur series, also includes the popular vocal version of "Senor Blues" by Bill Henderson.