BY JAKOB BAEKGAARD
January 28, 2009
Sign in to view read count 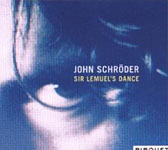 The cover of pianist John Schroder's Sir Lemuel's Dance showcases a peculiar detail that somehow makes perfect sense: a close-up photo of the leader's staring eye. It's far from unusual to have portraits of jazz musicians grace their album covers, but normally they're shown in full figure or at least with the whole face in front. Here it's just one eye—a detail taken out of context, yet one that fits into a greater picture: When the cover unfolds, Schroder's entire face is shown, thus making the part fit into the whole.

The same could be said about the music. At first encounter the music seems chaotic, yet there's an attention to detail that makes it hard to navigate through Schroder's knotty compositions. The opening "Rieselfaktor" swirls back and forth, with the leader's piano crashing as waves against a beach, while alto saxophonist Christian Weidner honks and screeches.

The chaos prevails on the title track, where snippets of melody surface among dense chords, but then something happens and a more regular groove is established. Bassist Oliver Potratz and drummer Oliver Steidle heat things up and a melodic theme develops. All the while, Schroder returns to freeform playing, interspersing bell-like tones and hard chordal blocks. A perfect balance arises between form and chaos, groove and abstract time, melody and dissonance.

The balance between form and chaos is maintained on tunes like "Mood 1697" and "Rubato." Once again, the most impressive thing about the quartet is the way it shifts between tempi. Each musician is able to turn on a dime and make the introspective moments shift into carefully controlled explosions. Schroder seems capable of anticipating the changing of form as each of the seemingly abstract pieces reveals an organic mosaic of sound.

Sir Lemuel's Dance isn't easy listening, but reveals form transcendent of the tired cliche of blues formulae. It may take a while to learn the dance but once it's seeped under the skin, the rewards returned are many.