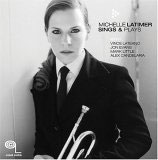 "If youth is a fault," wrote Goethe, "it is one that one gets rid of soon enough." On Michelle Latimer's debut as leader on her own Cool Note label, her youth is not exactly a fault, but it is a liability all the same, a quality that cries out to be either tamed or overcome. Her confidence and gusto know fewer limits than her emerging talent; much of the disc finds the Bay Area musician/singer/songwriter moving out of her present depth.

Trombonist Frank Rosolino's "Blue Daniel" opens Sings & Plays, a quick, no-frills rendition that Latimer approaches in a paint-by-numbers fashion. Veteran San Francisco-based bassist Jon Evans compensates for her stiffness with a solo of fluidity, originality, and substance, but it has the air of a rescue operation, as though he were on hand to restore order in case things go amiss. It makes Evans seem more like a chaperone than a fellow performer.

The band fills a similar role on "Moon and Sand." Latimer begins by singing, "Deep is the midnight sea/ ... sweet are your lips to me," and the long vowels of both "deep" and "sweet" are uncomfortably thin and strained. As she asks, "Oh, when shall we meet again?", the "when" is shooting for heights that she just doesn't hit. Meanwhile, Evans, drummer Vince Lateano, and pianist Mark Little maintain a solid, thoroughly enjoyable accompaniment, with Little contributing a modest and effortless solo before Latimer returns, this time to test the range of her horn.

Latimer sings the first half of "Corcovado" in Portuguese, but here, too, there are one or two notes in the upper register that evince a shudder. Her English delivery in the second half sounds at times odd and unnatural: "streams" being drawn out for no apparent poetic effect, "how lovely" arriving like a panicked afterthought. The arrangement itself is interesting: a lush string and wind intro, a somnambulistic tempo, and a minimalist rhythm. Latimer's solo is unadventurous, though she demonstrates a surer control of her instrument on this track than she does on others.

Latimer's original compositions, "Vierge" and "Lost in the City Together," are pleasant and accomplished but unexceptional. "Vierge" is an instrumental ballad; "Lost in the City Together" is a pop song in the classic mold and wouldn't have been out of place in Sinatra's repertoire. Yet Latimer subjects her voice to gymnastics—the lines "You can't always see the way home from here/ especially when daylight is through/ ...tomorrow's right around the corner with me" are tugged and stretched in every direction—exposing its limits and doing her original song a disservice.

Keeping Goethe's bon mot in mind, none of this need necessarily hinder Latimer in the future. Her first prominent outing sees her musically too cautious and vocally too hasty, but time and experience (including a few more sets as sideman) will enable her to extend the bounds of her abilities—or operate more gracefully and effectively within them.

Visit Michelle Latimer on the web.