By Hrayr Attarian
December 29, 2021
Sign in to view read count 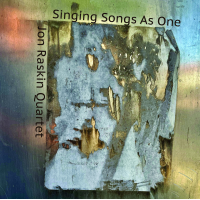 In 2021, innovative saxophonist Jon Raskin released a number of stimulating concerts which were initially streamed live on Oakland's NIR radio station in 2009. The last of the series is the intriguing and unique celebration of sound called Singing Songs As One. On it Raskin leads a like-minded quartet for a superbly cohesive performance. In addition, the engineer Eli Crews did some real-time overdubbing, enhancing the music's haunting effect.

"Configuration and Positioning," the longest track of the set, starts off with Raskin's yearning and emotive solo. Trumpeter Liz Allbee joins with her muted horn for a thrilling dialogue which is both vibrant and hypnotic. Pianist and percussionist Gino Robair's tolling notes and guitarist John Shiurba's poignant strums give the delightfully dissonant conversation a dramatic tension. The controlled and elegant melee that ensues is built upon repeating and ethereal motifs that are colorfully abstract and darkly contemplative.

In contrast, the title piece starts off as a collective improvisation and moves with other-worldly dynamism. Punctuated by silent pauses the horns' long, mournful lines alternate with angular rhythmic flourishes from Robair and Shiurba. Later Allbee and Raskin switch to sharp, crisp tonal shards and sonic clusters. Raskin's reverberating phrases within a pensive silence serve as a bridge into "Interspecific Communications 2" which follows while maintaining a cinematic ambience.

The definite spiritual theme that runs through the entire recording becomes manifest on "Variation and Specification." Robair and Shiurba's chant-like refrains lead to Raskin's eerie groans and twitters which form an incomprehensible yet deeply meaningful speech. Sparse percussive beats chime in the backdrop as strings shimmer with an other- worldly quality. A sublimely mesmerizing tune, the impact of which, like the rest of the album, lingers on long after it has stopped.

A provocative and satisfying listening experience, Singing Songs As One is now finally available for those who missed the original broadcast. It is also yet another brilliant addition to Raskin's uniformly superlative discography.