BY JIM SANTELLA
August 1, 2001
Sign in to view read count 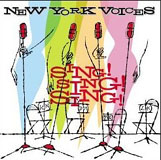 A big band made up of working New York musicians accompanies this vocal quartet in its retro look at the swing era. Buoyant lyrics and scat singing color the album with characteristic charm. It's the kind of patriotic, fun-loving feeling that followed The Andrews Sisters during World War II. Darmon Meader's vocal arrangements place the four voices close together. No one sings low; no one sings extremely high. Like Lambert, Hendricks and Ross alongside Count Basie and his orchestra, New York Voices moves in and around the band as if the four contemporary singers were veteran instrumentalists. Formed in 1987, the quartet released four albums with GRP and one with RCA Victor before signing with Concord Records late last year. Sing! Sing! Sing! is their Concord debut. A label long associated with fine jazz singing, Concord holds the key to this versatile ensemble's immediate plans.

Charter member Darmon Meader arranged most of the songs for this session. Most feature New York Voices fronting the big band with fast-paced spurts of scat and jump 'n' jive lyrics. They end this session with an a cappella "I'll Be Seeing You," that warms expressively, with countless, naked, harmonic nuances hitting you in the chest. Superb vocal artists, the foursome shows its forte when performing alone without accompaniment.

Classic songs such as "Orange Colored Sky" feature a particular vocalist and instrumentalist. This one stands out for its sweet interpretation by alto singer Lauren Kinhan, with a noticeably high-pitched flugelhorn interlude by Marvin Stamm. A tenor (saxophone) battle occurs on "Cloudburst," with Darmon Meader and Donny McCaslin trading phrases. Bucky Pizzarelli's rhythm guitar carries "In a Mellow Tone" along familiar paths. A rare tune, Duke Ellington's "Bli Blip," stands apart as one of the session's high points through the impressive scat singing of Kim Nazarian and Darmon Meader. Representative audio samples from this album are available from www.newyorkvoices.com .