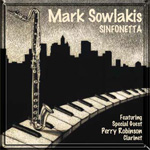 Bay Area-resident clarinetist, composer and arranger Mark Sowlakis' Sinfonetta is a rich amalgam of two genres that have not always found common ground in the past—jazz and classical music. Because Sowlakis is so thoroughly trained in both fields, the project comes off almost without a hitch. He plays with some of New York's best, if underrecorded musicians, including fellow clarinetist Perry Robinson, pianist Frank Kimbrough, and Ed and George Schuller (bass and drums respectively).

Among the strongest tracks on Sinfonetta are George Gershwin's sumptuous "Second Prelude" from Porgy and Bess and classical composer Eric Satie's well-known "Gymnopedie." Along with his solo take on "Prelude from Suite I for Unaccompanied Cello," Sowlakis' rich, full and flawless tone on clarinet and bass clarinet are striking. Robinson, serving as a special guest, meshes well with the date's leader. Also especially noteworthy are the note-perfect piano stylings of Jay Jackson on "Second Prelude" and Kimbrough on Bill Evans' "Time Remembered." The gentle, unobtrusive accompaniment of brothers Ed and George Schuller adds to the album's sense of enchantment. Sinfonetta is a self-confident and joyful affair, certainly deserving wider attention and radio airplay.