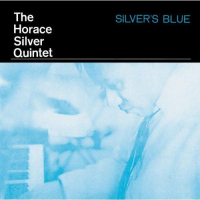 Horace Silver has always been an effective, if limited, catch-phrase soloist, an exemplary hard bop accompanist, and a brilliant miniaturist as a composer, contributing pieces that continue to surface and surprise with their inventive, irresistible melodies and inviting harmonic progressions. Unfortunately, the popular and critical success Silver realized with 1964's Song for My Father led to more of the same—formulaic tunes like the title song, restricted solo space for his musicians, and stiff presentations (the three times I caught him in person, he reminded me of a pop musician imitating his own recordings).

The genius of Horace Silver can be found in compositions like "Nica's Dream," "Moon Rays," "Strollin,'" "Ecarole," and this album's "To Beat or Not to Beat." And his best recordings are the ones that feature Hank Mobley, allowing the gifted melodist as much room as he needs to explore the possibilities of the composer's lyric conceptions. Mobley, in turn, always seemed to bring out Horace's romantic side and inspire his most sensitive orchestrations and responsive ensembles.

Recorded in 1956, several months after the essential Columbia session Art Blakey and the Jazz Messengers, Silver's Blue features the same lineup minus Blakey (Joe Gordon, a fiery, Clifford-inspired player, replaces the logical, flowing Donald Byrd for incisive, bracing solos on two of the seven tunes). In the liner notes specially written for this 2005 remaster, Silver insists that Mobley was not merely the "middleweight" champ of the tenor saxophone but a player of the highest order, as well as a strikingly gifted composer.

To anyone with attentive ears, the evidence on the recording—beginning with the smoky sweetness of the earthy, unforced tenor solo on the opening blues—should provide ample support for Silver's estimate. In fact, Mobley is at once right in the pocket and ceaselessly inventive on each of these tunes, ranging from slow blues and standards to show tunes, hard-boppish Silver gems and Mobley's own "Hank's Tune." Last but not least is the lovely, unforgettable "The Night Has a Thousand Eyes," a song that may owe its status as a jazz standard to this early, warm and definitive performance.

This session will not appeal to ears attuned to hard edges, exaggerated funkiness or jarring visceral effects. It's too bad Sony thought so little of consumers' integrity as to encode initial versions of the release with its copy-protect virus, because the company has otherwise produced some of the best remasters—no artificially boosted instruments, distorted piano frequencies or flattened acoustics. Just honest, natural sounds recorded with the musicians "imaged" to reflect their spatial relationships with each other.

Silver's Blue is a session that wears well, holding up to many repeated plays and amply rewarding the listener's investment of time and attention. No worry about the devaluation of silver here.