By Phillip Woolever
June 15, 2014
Sign in to view read count 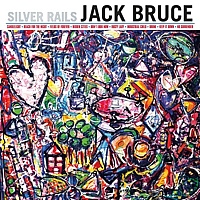 Jack Bruce and a sterling cast of supporting players roar down breathtaking tracks on this powerful production, offering what sounds like Bruce's autobiographical retrospective in an artistic, highly personal manifesto.
The album seems to progress in stages, starting with British blues and abstract jazz, musical touchstones Bruce has based much of his catalog on. A rotating ensemble establishes middle ground between the bittersweet buzz of alternative genres, before rocking down the finish line to close with a bite and a bang. No whimpers here.
Seven of ten songs were co-written with Pete Brown, whose collaborations trace back to the 1960s Cream era. The compositional chemistry is still quite good. Hammond heroics by John Medeski provide distinctive flair on five tracks.
"Candlelight" introduces deceptively jaunty electric UK blues for a loping lament on mortality, with well structured bursts of horns and a nice touch of gospel- tinged keys. With ten musicians, the song features the disc's biggest band. One of the record's illustrious lineup of guest guitarists, Phil Manzanara, should stand out more considering his Roxy Music pedigree. Manzanera hits some cavernous chords but his solo is too short. This whole tune could have gone at least a few fine minutes longer. Bruce is in good vocal form. His delivery isn't smooth but it serves the song's theme and obviously fits well.
"Reach for the Night" builds piano bridges while a yearning organ rolls like wheels of fire. This isn't Bruce's strongest singing, but some of his most effective anyway. A warble of despair echoes down the alleys of a town without pity, with some nice sax by Derek Nash.
"Fields of Forever" wouldn't be out of place on Cream's Goodbye (Polydor/Atco 1969), which is pretty high praise. Bruce does a new scrap yard thing without any wasted rhythm recycling. The narrative flow of social commentary continues on "Hidden Cities," but this time Bruce's vocals sound more ponderous than precise. The weakest link of the disc.
The session jumps back on track with "Don't Look Now," one of Bruce's strongest efforts at any stage of his career. It's a near-perfect piece except for a brief chorus of keys with just a bit too much "Oklahoma" cheese. Bruce's poetic vocals shift to a stirring higher pitch reminiscent of the heralded "As You Said."
"Rusty Lady"continues a long run with another long time partner, Robin Trower, who's been there from the BLT ( Chrysalis '81) lineup to Seven Moons (Evangelene '08). Trower is in his usual fine form, while Bruce's singing is still flowing smooth. The songs's silly political subject matter certainly isn't Brown's most prolific prose, but it does include redeeming lyrical gems like "when she stepped from her oxhide car, it was Winston in drag without the cigar."
The brick by brick fit of vocals and instruments is well connected on the dirge "Industrial Child," with only Bruce's piano and Tony Remy on acoustic guitar, achieving a good, stark buzz.
"Drone" plays exactly like it sounds, the closest Bruce comes to a political statement on his only solo writing credit here. There's fitting cynicism for this social season, with reverbed lyrics over a solid mechanical grind and a nice, hard edge. Another duet, with drummer Milos Pal.
Whether subliminally suggested or a conscious nod to Eric Clapton, his influence is hugely apparent on "Keep It Down," setting the Way Back machine for later Cream, along the crossroad of 461 Ocean Blvd (RSO '74) . It works well.
"No Surrender" is a mid speed rocker to close the show strong. Though not as deep as the CD's best tracks after Bruce's gangsta posing, it's solid enough nonetheless. Axe man Bernie Marsden pulls on his Leslie West boots for a pleasurably piercing assault.
There are a few minor miscues but as a whole Silver Rails is easily one of Bruce's strongest efforts, probably his best overall in years. There's a little jazz, a healthy portion of blues rock, with substantial raw spaces and mainly a lot of Jack Bruce, punching hard at age 71.
Saddened but unbowed, weary but still working, this sincere statement is a reflective tour de force as Bruce's way of addressing his legacy and his lifetime.
Folly, remorse, desire and glory. Bruce has balanced the beat through them all, and more. This is him, telling about it.