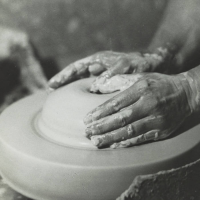 Sigh (carried away) / Grado de potencia #2 is the first in a series of three albums which are part of a project by the duo comprising Chilean guitarist Cristian Alvear and Swiss percussionist & Insub co-ordinator Cyril Bondi. The series' recordings will feature interpretations of six new compositions commissioned by the duo from three Chilean and three Swiss artists, This album features the two compositions which give it its title, "Sigh (carried away)" composed by d’incise, and "Grado de potencia #2" by Chile's Santiago Astaburuaga. The tracks were recorded between May and July 2021 at Insub.studio in Geneva and at Alvear's home studio in Santiago.

On Bandcamp, the tracks are listed separately with durations of forty-two-and-a-half minutes and twenty minutes, respectively, but on the CD they play sequentially as one sixty-three-minute track. Either way, the two tracks contrast with one another; on his composition, d'incise contributes electroacoustic treatments to Alvear's electric guitar and Bondi's four cymbals, which makes sense as he wrote it; on Astaburuaga's piece, Bondi and Alvear both contribute field recordings in addition to their percussion and electric guitar.

The different instrumentations on the two compositions give them dissimilar soundscapes, making them feel quite different. from each other. On "Sigh (carried away)," Bondi's cymbal work gives the piece a steady tempo which combines with d'incise's interjections to give a quasi-industrial feel. "Grado de potencia #2" is more diffuse, as its field recordings intermittently feature human voices, animal sounds and birdsong, punctuated with occasional silences, Both make good listening and their contrasts make them a well-chosen pair. As the first of this series, the album works in its own right and also augers well for those to follow.