By John Kelman
September 27, 2006
Sign in to view read count 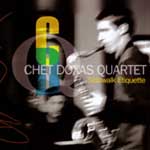 Between appearing as the house band at this year's Montreal Jazz Festival jam sessions and recording his debut CD, Rate of Change (Effendi, 2006), the flexibility of Montreal-based pianist John Roney and his trio with bassist Zack Lober and drummer Jim Doxas should come as no surprise. As the rhythm section with Jim's brother Chet's quartet, they demonstrate even greater stylistic breadth. Sidewalk Etiquette is the saxophonist's debut, and it includes an engaging set of songs by Lober, John Coltrane and Joe Zawinul, but leans most heavily toward Doxas' writing.

Doxas' writing also demonstrates a depth and degree of complexity beyond his years. The ten-minute title track shifts gears multiple times, with Lober's robust bass often providing the anchor while the drummer's emphasis-shifting approach keeps everyone on their toes. The leader's cerebral yet visceral solo gradually builds in intensity, showing that speed isn't the only way to create energy. Roney solos over a vibrantly swinging section; Jim Doxas' cymbal work provides a strong pulse in tandem with Lober's powerful walk.

The up-tempo "Upstart" is less episodic, but its lengthy theme twists and turns before heading into a solo section where Roney's strong narrative explains why, along with Torontonian David Braid, he's one of the strongest pianists to emerge on the Canadian scene in recent years. "Long for Shorter" is a darker piece. While more rhythmically propulsive than Shorter's current quartet tends to be, it demonstrates a similar kind of abstruse lyricism. Lober's "Rite Shoe" has a similarly knotty theme, but ultimately settles into a Latin-esque solo section where Roney's warm Rhodes supports Doxas' strong tenor.

There's not a weak link to be found in the quartet, but Jim Doxas deserves special note. He emerges as an incredibly elastic drummer with open ears and a temporal looseness that sometimes feels as if he's on the edge of a precipice.

But everyone in the group really deserves greater exposure, too. Between Roney's acoustic trio, the electronica-centric Byproduct (featuring Lober and the Doxas brothers) and Chet Doxas' quartet, it's becoming clear that these four musicians have bright and varied futures ahead of them, whatever the context they choose. Wholly modern yet clearly steeped in the tradition, Sidewalk Etiquette is further evidence of the vibrancy of Montreal's improvising scene.