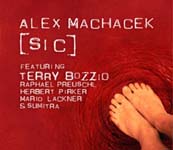 There's been considerable hype surrounding this release by Austrian guitarist Alex Machacek, so let's dispense with that right away: it's all true. While there are innumerable great guitarists, it's rare for one to emerge, seemingly out of nowhere, with an album this conceptually well-formed.

Machacek is recognized as a virtuoso who combines the legato phrasing of Allan Holdsworth with the rockier edge of Mike Keneally and the knotty ideation of Frank Zappa. But despite his staggering technical ability and a complex compositional approach that draws as much from new music as jazz, Machacek's playing never approaches the excesses often attributed to fusion. And while fusion is where most people will pigeonhole Machacek, one listen to [sic] and it becomes clear that this is only one part of a much larger equation.

That's not to say Machacek doesn't deliver some mind-warping shredding, as he does during the second half of "Indian Girl [Meets Austrian Boy]," featuring his wife, Sumitra Nanjundan, on vocals. But his approach is so advanced that it'll have even the most adept guitarists scratching their heads. High-speed guitar playing can often rely on a natural falling of the fingers into common patterns, but there's nothing predictable about this music: the incredible intervallic leaps and melodic ideas which originate from Machacek's clearly focused concept avoid being either horizontal or vertical.

Three tunes on the album are built around solo drum improvisations by Terry Bozzio. The title track is initially dark and mysterious, but dense chord clusters ultimately give way to staggered, but ultimately cohesive serpentine phrases. Randy Allar's commentary ("there ya go," "that sounds really neat") is curious but doesn't detract from Machacek's detailed layering of guitars and bass.

Some of these tunes feature Machacek's fine trio with bassist Raphael Preuschl and drummer Herbert Pirker, but the leader is a multi-instrumentalist who can be completely self-reliant as required. He plays more than credible vibes on the metrically challenging "Yellow Pages," marimba on the rhythmically tribal yet Zappa-esque "Djon Don," whose second half is built around another Bozzio improv, and bass clarinet and piano on the labyrinthine "Austin Powers."

Unlike Holdsworth, who has spent a career trying to make his guitar sound like anything but a guitar, Machacek is comfortable with the instrument's inherent attack. He delivers warm-toned chordal passages on "Out of Pappenheim," the closest thing to jazz on the album. But he's equally comfortable with using technology to make his instrument more textural.

Machacek's remarkable blend of advanced composition, masterful technique, and total musicality makes [sic], quite simply, an instant classic that transcends genre-typing, and one of the best records of the year.