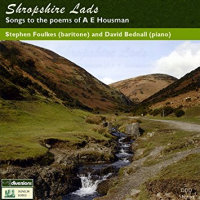 'TERENCE, this is stupid stuff: / You eat your victuals fast enough;
There can't be much amiss, 'tis clear, / To see the rate you drink your beer.

With those words, poet AE Housman begins his celebrated Poem LXII from his famous collection A Shropshire Lad. This particular poem contains the admonition that, ..."malt does more than Milton can / To justify God's ways to man." Yet none of this appears in the present recording of Housman's verse set to music by the likes of Benjamin Burrows, Arnold Bax, Ernst John Moeran, and Arthur Somervell for performance with baritone and piano. That is a certain combination. Think of Schubert's Winterreise come to Ludlow Fair, leaving his necktie God knows where. Baritone Stephen Foulkes is well up to the task and performs well against Bryn Terfel's 1995 Deutsche Grammophon collection of similar material. This music is not for everyone, there is much here to delight the lover of the art song. Houseman's with is well captured in these minitures, ably rendered by maters Foulkes and Bednall. Take a walk on the wild side from time to time.

Benjamin Burrows: Grenadier, The Half-Moon, the Sigh, From Far; Arnold Bax: Far in the Western Brookland; In the Morning, When I was One and Twenty; Brian Daubney: The Land of Lost Content; Margaret Wegener: Look Not in My Eyes; Clive Pollard: Because I Liked You Better; Calvin Bowman: R.L.S.; Stephen Duro: Is My Team Ploughing? Ernest John Moeran: When Smoke Stood Up, When I Came Last to Ludlow, Far in Western Brookland; Arthur Somervell: A Shropshire Lad.