By GARETH THOMPSON
September 19, 2018
Sign in to view read count 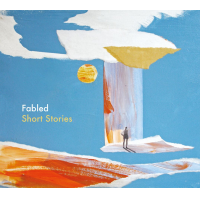 Anyone who has ever pulled pints for a living probably has some stories to tell. Sam Rapley, the leader of Fabled, used to work behind the bar in Manchester's renowned Band On The Wall club. A favoured site during World War II, its jazz acts often played on during air raids. Legend has it that twenty-four thousand beers were sold there one public holiday.

Rapley wouldn't know such excess on his latterday shifts, but he surely found the venue inspiring. Taught piano in childhood by jazz pianist Robin Joiner, he later took up clarinet until his fingers grew large enough for a sax. Listening to Rapley now, you grasp his avowed love of Stan Getz, though John Surman and Eric Dolphy are worth musing over as regards the whole clarinet-sax hookup. The piano works of Sibelius and Ravel rather chime on Short Stories too.

After moving to London, Rapley assembled a crack line-up of young talent for Fabled. None of his backing quartet is shy about muscling in during this fearless alloy of composed tracks and improvs. The album opens with "Dove Stone" and some pronto piano, like the soundtrack to a pursuit or an escape. Tension is released when Rapley enters sublimely on sax, with spacey guitar lines flowing in tow. Syncopated rhythms turn things thrilling again, under discordant hints and clarinet swirls.

"25 Years Of Rain" has another downpour of keyboards, as Rapley's sensual clarinet makes overtures to some skittish guitar. "H.G." is more likely based on Wells the author than Mercury's chemical symbol and it accents Rapley's love of implied narrative. More urgent piano underpins this tender and lost lament for... what? The social collapses predicted by H.G. Wells, maybe?

Vintage vibes on "Little Air" bring a smoky shuffle into some old Harlem ballroom. That is until Will Glaser's drum bashing turns the piece real antsy, as if the whole joint just got busted. The rhythm section's dark drubbing and Rapley's brash soloing send "Old Owls" down an alley full of nighthawks and tomcats. "The Picture House" then mostly does without its chief director for five minutes, as guitar and violin join forces in a kind of devotional polka.

"First Love Last Rites" draws inspiration from Ian McEwan's disturbing yet compelling story collection. Nervy piano and murmured reeds lapse into an improv that reaches a hawkish finale. Finally, you could dance a wedding night away to "For Richer, For Poorer" with its pop sensibility. A lovely keyboard lilt and amorous sax lines combine here to capture your heart.

Fabled's every piece has its own melodic twists and turns, creating a series of real musical page-turners. Rapley is spinning these short stories to maybe write his own long-term legend. So pretend to your mates that he once poured you a pint.