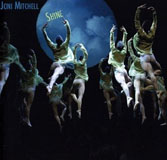 With a remarkable career that includes the near-perfect Asylum triptych of Court and Spark (1974), The Hissing of Summer Lawns (1975) and Hejira (1976), it's almost beyond reasonable expectation for Joni Mitchell to produce an album that, more than three decades later, lives up to those early classics. Still, while Shine doesn't quite have the magic of those three releases, it's certainly one of her best since.

It's also an album where Mitchell admits, in the liners, to having recaptured her muse for the first time in a decade, which better explains the lack of new material, as opposed to her anti-industry rant earlier in the decade, curious mostly because it came after she'd signed with Nonesuch—one of the more reputable and boundary-free American labels—which released one of the most compelling career retrospectives ever in Travelogue (2002), where Mitchell and orchestrator Vince Mendoza brought fresh perspective to some of her best songs.

However, unlike the broad-scoped Travelogue, Shine has an almost DIY (do it yourself) feel to it. While some of the usual suspects—pedal steel guitarist Greg Liesz, bassist Larry Klein and drummer Brian Blade—show up alongside relative newcomer/saxophonist Bob Sheppard and a couple of other guests, Mitchell creates most of the album's orchestration on her own, on guitars, piano, keyboards and, in some cases, her near-signature lush and multilayered vocals. The album opens, in fact, with "One Week Last Summer, an instrumental where Mitchell is joined only by Sheppard and demonstrates, one suspects, lessons learned collaborating with Mendoza on Travelogue and Both Sides Now (Reprise, 2000).

Lyrically speaking, Mitchell's pen has become sharper in recent years and somewhat more direct. While a new version of her enduring "Big Yellow Taxi draws a clear line between the Mitchell of 1970 and today, songs like "If I Had a Heart, "Bad Dreams and especially "Strong and Wrong are amongst her most acerbic. Mitchell of old combined sociopolitical commentary with more personal, autobiographical songs, but Shine is almost exclusively about the sorry state of the world she sees today.

That said, the music on Shine sometimes feels at odds—but in the best possible way—with Mitchell's world view. "Bad Dreams may be a cautionary tale, but one delivered with elegance and dark beauty. And while the anti-war, anti-fundamentalist sentiment of "Strong and Wrong is unmistakable, it's a lyrical and undeniably attractive, albeit melancholy, piece of music.

Cynics may point out a certain disconnect between the strength of Mitchell's prose and the fact that Shine is released on Hear Music, "The Sound of Starbucks. Still, it's a point that can easily be forgotten on an album that proves how, muse intact; Mitchell still has what it takes to deliver compelling, timely and meaningful music.

One Week Last Summer; This Place; If I Had a Heart; Hana; Bad Dreams; Big Yellow Taxi (2007); Night of the Iguana; Strong and Wrong; Shine; If.