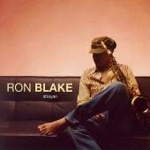 If you've heard bassist Christian McBride's blazing Live at Tonic (RopeaDope, 2006), then you're familiar with the powers of Ron Blake. On some tracks, Blake blasts soul-drenched tenor in the same vein as Junior Walker; on others, he launches solos that approache the same technical and emotional level visited by Wayne Shorter. Blake's overall performance on Tonic is world-class—and it leaves you completely unprepared for the relatively peaceful world of Shayari.

About the only thing Shayari has in common with Tonic is they both boast some pretty big guest stars. But while Tonic features the McBride band in atomic-powered super-jams with heavy hitters like Charlie Hunter and DJ Logic, the visitors on Shayari only make cameo appearances in a series of intimate conversations between Blake and pianist/producer Michael Cain. The exceptions are Jack DeJohnette and Gilmar Gomes, the percussion tag team on most of the date. Their respective approaches are as different as night and day, which adds wonderful variation to this extraordinary musical tapestry.

Gomes is all about nuance, bringing accent and contrast to Blake's already-outstanding work. On the opener "Waltz for Gwen," Blake and Cain immediately trade references to "Yellow Rose of Texas"; Gomes picks up on that, adding hissing shakers and clip-clop blocks to give the piece's first section the feeling of a cowboy on horseback, cantering through the desert. A single drumbeat turns Alan Bergman's "The Island" into a funeral procession for the past, and Gomes' bells and hand drumming substitutes for early-morning sounds of nature on "Come Sun."

Meanwhile, DeJohnette does what he does best: bringing the noise. He's barely audible at the start of "Atonement," as Blake pours a butter-smooth solo onto Cain's foundation riff. But as DeJohnette kicks it up one notch after another, Blake matches his fire until they are both in a state of improvisational frenzy. The chemistry between Blake, Cain and DeJohnette is both volatile and exquisite; their five tracks together picking up where Don Byron's update of the bass-less trio—Ivey-Divey (Blue Note, 2004)—left off.

Others get into the act, if only briefly: McBride lays an impeccable foundation for the slow blues "What Is Your Prayer For," while still making time for wild blasts of improvisation, and he is the engine that drives Blake's bopping take on Bobby Hutcherson's "Teddy." Regina Carter's sassy violin is ice-cool on "Of Kindred Souls," and the harmonies she and Blake provide just can't be beat.

Blake and Cain's duets have a cozy quality that draws you in like a friend beckoning you to take a seat. Blake's "Remembering The Rain" and Sammy Cahn's "Please Be Kind" evoke a smoky nightclub, with Blake playing soulful torch songs in the spotlight while Cain contributes exquisite piano from somewhere in the darkness.

Shayari is a shared vision of vast, fathomless emotion. It also shows Ron Blake standing tall as a solo artist, and he doesn't need electric bombast to prove it.