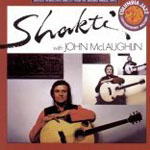 I remember quite clearly walking through the aisles of the Sears record department in 1976 checking to see if there was a new Mahavishnu Orchestra album. What stared back at me from the Mahavishnu bin was a very strange looking album cover. John McLaughlin had longish hair and a tight, confident smile, and he was holding the oddest-looking acoustic guitar I had ever seen. It had an extra set of strings attached in a crooked fashion across the sound hole. The information on the back cover made matters even worse. I remember wondering who this Raghavan guy was, and what the hell was this mridangam that he was playing? I'm still not truly sure what a mridangam is, but I am quite sure I love Shakti.

McLaughlin had abandoned the electric Mahavishnu Orchestra and put together a band featuring some of India's greatest young musicians, thus dooming his popularity. Together with McLaughlin, tabla master Zakir Hussain, violin virtuoso L. Shankar, and ghatam player T.S. Vinayakaram made up Shakti. Although not a core member of Shakti, the previously mentioned Raghavan also joined in on the previously mentioned mridangam. With names like that and 30 minute long tunes, Shakti did not get much airplay in the U.S.

Shakti was recorded live at South Hampton College in New York State, and the live audience is truly a part of this performance. One can only imagine what they were expecting before the concert. McLaughlin had earned his fame as Mahavishnu. He was the king of the electric guitar. Instead, he appeared on stage with the acoustic Shakti, sitting down Indian style. The drones started humming. This had to be bizarre. 'Pass the joints. Quick!' However, several minutes into the first piece, Shakti had the crowd in its hands.

Blistering guitar runs, unison playing among all the players, and mesmerizing percussion duels make Shakti one of the most exciting live recordings around. Shakti created as vast a fusion as could be imagined at the time. The musicians were introducing World Music, albeit with a wild jazz abandon, twenty years before anyone else even attempted such a thing again.

McLaughlin was speed-bending notes and strumming those extra sympathetic strings which had been positioned on his guitar. Shankar's Far Eastern violin matched McLaughlin's guitar in call and response after call and response. And without a doubt, the album's high water mark is the culmination of an absolutely riveting percussion duel between Hussain and Raghavan resolving the oddly-titled 'What Need Have I for This? What Need Have I for That? I am Dancing at the Feet of my Lord. All is Bliss. All is Bliss'. It appears the audience shared in a group musical orgasm at that moment.

According to Jeff Beck, McLaughlin's playing with Shakti was as good as any player could hope to do. The original Shakti never sold a lot of records. But today they are seen as one of the true pioneers, and their current reunion version is at long last commercially viable.