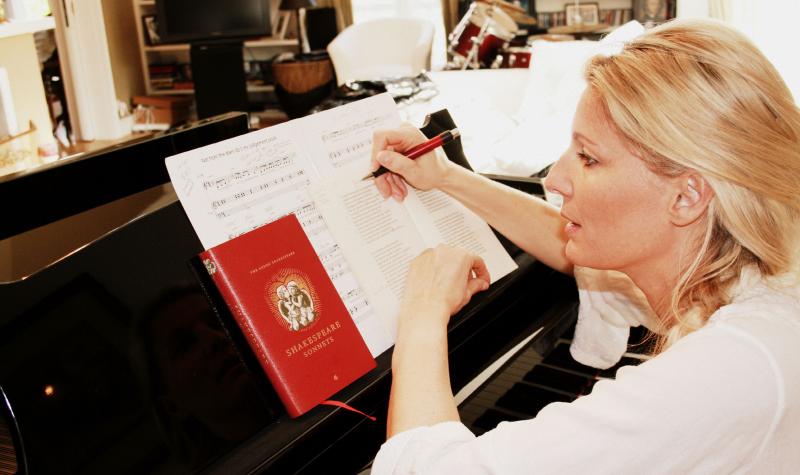 "If music be the food of love, play on." And while you're at it, set 16 of Shakespeare's sonnets to music, and play and sing them to a jazz beat. Which, by my troth, is exactly what Caroll Vanwelden has done. The comely Belgian pianist wanted to produce a new album of her own compositions. "One day I found a book of the sonnets I used 13 years ago when I worked with an Iranian composer who wanted to put Shakespeare on classical compositions" Vanwelden recalls. "I went through the pages sitting at my piano and stopped intuitively on lyrics that inspired me. I didn't try to understand their meaning. When I read Shakespeare, I hear melodies in my head."

The 16 pieces "came very fast, one after another, really amazing," the pianist further explains." She saved everything on her little R09 stereo recorder, and worked further from there. She's titled her new release Caroll Vanwelden sings Shakespeare Sonnets (Jazz 'n' Arts, 2012), because she wanted people to know she wasn't reciting them. She is adroitly backed by trumpeter/flugelhornist Thomas Siffling, double bassist Mini Schultz and percussionist Marcus Fuller. Vanwelden pronounces Elizabethan English well; still, it helps, on first listen, to look at the words as well. You can find them at Vanwelden's website.

"Cabaret," once a style of music, has come to stand for both a medium and a location. "It can be jazz-driven, like that of Ann Hampton Calloway, or theatrically oriented, like that of most of the leading ladies headlining at 54 Below," writes Will Friedwald in The Wall Street Journal, referring to clubs in New York, London and Glasgow. The medium has long been linked with 70 to 80 year-old songs and fans of the same vintage. But it's evolving and attracting younger audiences. Veteran artist K.T. Sullivan points to Andrea Marcovicci doing a song by pop star Pink in her show at New York's Café Carlyle, while Sullivan included a Joni Mitchell tune in her closing production at the now-closed Oak Room. Sullivan has a new show, a tribute to Mabel Mercer, opening at Crazy Coqs, in London. "One of the things about cabaret," the 37 year-old Emily Bergl (a Sullivan protégée) said onstage this fall, "is that it's the only medium where I'm considered one of the younger artists." (Adds Friedwall: "It's also where a The Beatles song is regarded as contemporary.")

The End of Jazz? By No Means!

"The End of Jazz—How America's Most Vibrant Music Became a Relic," in the November issue of The Atlantic magazine, disturbed many readers who managed to plow past the two opening sentences of Benjamin Schwarz's (positive) book review: "Musician, composer, scholar, teacher, perhaps a bit of an operator—albeit of a distinctly nerdy variety—Ted Gioia is also the sort of compulsive, encyclopedically knowledgeable enthusiast the jazz world engenders. (Dan Morgenstern, Will Friedwald, and the winningly neurotic savant and broadcaster Phil Schaap immediately come to mind as other examples of the type.)" The review is "off base," Morgenstern e-mailed me. "The stuff of jazz goes far beyond the American songbook," he noted. It includes "the endless possibilities offered by the blues and 'rhythm' changes, which continue to be the basis of so many jazz 'originals.' And what jazz musician worthy of the name won't find Monk tunes a reservoir of innovation? The author does not seem to understand that jazz, in its own way, is very much like classical music insofar as it is, yes, repertory based."

Who Will Succeed Morgenstern at IJS?

The gears of academe grind slowly. At press time, those driving the Institute of Jazz Studies at Rutgers University-Newark seemed to have ground to a halt. Dan Morgenstern retired in April as director (since 1976) of IJS. His associate, Vincent Pelote, continues as acting director of the world's largest library and archive of jazz and jazz-related materials. Pelote started with a work-study stint in 1975-1978, continued as a cataloger in 1978-1987, then as librarian until now. Edward Berger began as a curator in 1976-1977 and rose to assistant director in 1977-1987, when he became associate director. "Tad Hershorn, the lone archivist, is holding the fort," a knowledgeable source told this column, adding that interns come and go. So we'll go on waiting to see.