Bobby Previte and the New Bump: Set The Alarm For Monday 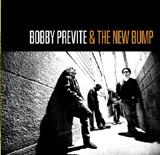 Conceived as a long form suite, the album opens gradually, working through progressions in mood episodically. Narrative song titles like "She Has Information" and "There Was Something In My Drink," suggest an evocative film-noir atmosphere that unravels like chapters from a pulp novel; each tune is another act in the continuing saga.

An aura of suspenseful mystery permeates the session, which unfolds with foreboding drama, intermittently punctuated by rousing anthems. Book-ended by enigmatic tone poems, the core of the record features simmering ostinatos and driving vamps that conjure scenes of shadowy rendezvous at secret after- hours clubs and frenzied chases down seedy back alleys. Driving these pieces, Previte unfurls a multitude of Latinized polyrhythms, with tasteful syncopated accents provided by Jim Pugliese.

As fellow veterans of the fertile Downtown scene, the sextet delivers these stylish urban panoramas with convincing flair, effortlessly shifting from brooding atmospherics to sultry Latin grooves. Previte's most rewarding acoustic album in years, Set The Alarm For Monday effectively captures the mythic soul of Gotham after dark.