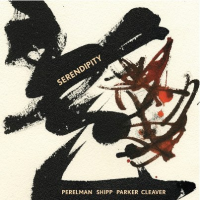 Currently in the midst of an unprecedented mid-career renaissance, wildly prolific tenor saxophonist Ivo Perelman has been recording for Leo Records at a frantic pace, typically issuing several new albums at a time. Released concurrently with The Edge and The Art of the Duet, Volume One is Serendipity, a title that bears out its namesake. Taped in the winter of 2011 during what was originally intended to be the session for The Foreign Legion, a bass-less trio date with Perelman's regular collaborators pianist Matthew Shipp and drummer Gerald Cleaver, this unplanned quartet effort with legendary bassist William Parker is a truly serendipitous affair.

Unlike The Edge, which finds Perelman collaborating on a number of improvised pieces alongside Shipp's working trio with bassist Michael Bisio and drummer Whit Dickey, Serendipity contains a single unedited performance. Spontaneously conceived in the studio, the 43 minute self-titled suite ebbs and flows through a volatile array of moods, revealing the intuitive rapport shared by these respected veterans. Dynamic, but generally more assertive than The Foreign Legion, this epic album-length excursion features some of the most trenchant testimonials Perelman has set to wax.

The titular improvisation follows a constantly shifting arc throughout its duration, touching on abstracted funk, post-bop and swing foundations that spotlight the instrumental facility of each member, including a hushed bass soliloquy from Parker which provides temporary sonic respite. Considering the number of recent additions to Perelman's discography, it can be daunting to navigate his expanding oeuvre. Although not for the faint of heart, Serendipity is a prime example of the maverick tenor saxophonist at his most impassioned.