Chris Monson: Seldom in the Well

By Jack Bowers
November 4, 2018
Sign in to view read count 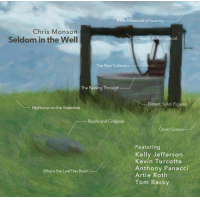 Canadian guitarist Chris Monson's debut album, Seldom in the Well, is seldom strident or uninteresting, thanks in large measure to Monson's fluent compositions and arrangements, an able rhythm section, and a talented front line consisting of trumpeter Kevin Turcotte and tenor saxophonist Kelly Jefferson. On the other hand, the studio session seldom catches fire, as its disposition is for the most part genteel and even-tempered.

Among the more unforeseen surprises is that Monson seldom shines the spotlight on himself, choosing instead to help pianist Anthony Panacci, bassist Artie Roth and drummer Tom Rasky keep the rhythm sharp and suitable. While Panacci solos impressively at times, the lion's share of the improvisations is assigned to Turcotte and Jefferson, who carry out the task with adeptness and assurance. Monson's music is thematic in that each of his songs presumably has something to do with wells (the drinking-from kind) but that's about as far as it goes conceptually. Leaving that aside, his nine compositions are emphatically modern yet seldom stray beyond the bounds of customary.

Monson solos on "Ripple and Collapse," "The Rain Collector," "Highbrow on the Waterline" and (briefly) "Reach. Reflect. Recoil." While he obviously knows the changes and how to use them, his solos are more workmanlike than special. Turcotte and Jefferson, although quite proficient, may also be placed in a category labeled "well-spoken but unremarkable." They simply do the job without any needless trappings. As for Panacci, Roth and Rasky, they are a solid team that is seldom if ever uneasy or out of step regardless of mood or tempo.

Seldom in the Well embodies music that is worth one's time but seldom rises to the level of uncommon. In other words, quite good but not quite memorable.

Where the Leaf Has Been; Distant. Solid. Figures.; The Passing Through; Ripple and Collapse; The Rain Collector; Reach. Reflect. Recoil.; Open Spaces; Highbrow on the Water Line; If We Dreamed of Soaring.