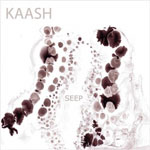 Seep is a record that begs to be listened to over and over so that the experience of being totally swept away can be repeated. Along with new releases by the Sunny Jain Collective, on which Sinha sings, and the Raw Materials duo of Vijay Iyer and Rudresh Mahanthappa, Seep adds another viewpoint to the developing Indo jazz scene.

Of the three, the connection to Indian culture is strongest in this release, not the least because Sinha is a vocalist, and communication from performer to listener is usually much more direct with the human voice. While the best jazz can reach a spiritual level in its intent and effect, Sinha's intention and impulse starts from the spiritual side of Indian culture. Sinha's music is steeped in the classical Indian tradition, and it becomes something more than a musical performance: an act of giving.

Seep is the first release by Samita Sinha's band Kaash. The group's name, as explained in the notes, means "with the hope that..." or "a hopeful if"—and, as Sinha says, the band "is both of the moment, a spontaneous creation resulting from a crashing/confluence of cultures and knowledges, but deeply rooted in tradition that far, far predates us."

According to Sinha, the album title means that "our music seeps into listeners in much the same way meaning seeps into the hearts and minds of people: strong and present but mysterious and not necessarily linear, with a wide range of dynamics and emotions. 'Seep' also implies fluidity, subtlety. The idea behind the music of Kaash is to absorb the listener, invite him/her to travel with us." When you listen to Kaash, you enter a world that is not only musical, but also philosophical, spiritual, meditative and sensuous.

Sinha and Jain, who make up the core of the band and share the composing and arranging duties, link to tradition but add elements from the West. Jesse Neuman adds not only traditional trumpet, but also effects on those notes that add a shimmer to the atmosphere. Josh Pearson is credit with "sound design" on three tracks, as are Jain (3) and Neuman (1). Electric bassist Daniel Fabricatore is the most "normal" player, providing both a hypnotic repetition and deep grooves that lock in with Jain's drumming.

The music is a fascinating mix and intertwining of East and West. Sinha, especially live, can be a commanding and mesmerizing performer, in total control of the proceedings—and she is here.