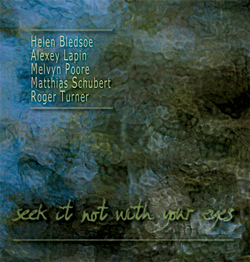 If free improvisation is ever in danger of becoming as stylized and hidebound by convention as the post-bop continuum, then it won't be the responsibility of the musicians featured on this release. Despite the almost half-century of free improvisation on record, examples such as Seek It Not With Your Eyes serve to emphasize how the methodology is still fresh and still a haven for the unexpected; that elusive sound of surprise is evident here in abundance.

It goes without saying that all the musicians present are well-versed in the language. The very indeterminacy of the music's progress on the opening "Per Aspera" serves notice of it, as if it were needed, with Matthias Schubert showing how something startling can be coaxed out of that quintessential instrument: the tenor sax. It would be damning his work with faint praise to say that he deals in lines so alert to the passing moment, but there's substance in the idea that he hews closest to the recognizable continuity of all the players. His is the voice that holds attention in a way that probably wasn't obvious to the audience, in front of which this music was performed.

The quartet is joined by flautist Helen Bledsoe on the lengthy "Little Ways To Perceive The Invisible," where the very indeterminacy of the music's progress is the only thing that's guaranteed. Melvyn Poore, elsewhere never shy of utilizing the guttural qualities of his instruments (tuba and euphonium), is a model of restraint, even though the terminology seems inadequate for such rarefied music. Bledsoe's timbre alludes to strands of world music, but is the collective nub of the piece that such references are useful merely as points of reference. Schubert is, by turns, fractious and disputatious, but without ruffling the music's surface. In proceeding by stealth, the music seems allusive and timeless; almost recognized outside of the continuum.

On the relatively brief "Blur / Fanfare For The Rational Man" pianist Alexey Lapin comes as close to convention as he ever does, skirting around territory mapped out by Cecil Taylor and Alexander von Schlippenbach, even while his attack is more reflective and, perhaps, less inclined to feed off of its own momentum. Schubert's sonority is a law unto itself, even while he lays down a minimalist manifesto in the midst of Roger Turner's multi-hued percussion shading. The resulting energy is muted, even as it's marked by an underlying anxiety, the primacy of the moment manifesting itself in veiled ways.

Per Aspera; Can't Catch The Name; Blur / Fanfare For The Rational Man; Little Ways To Perceive The Invisible; Animated Beings.