Sun Ra: Secrets of the Sun 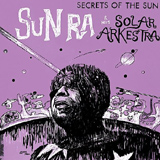 Another recently unearthed rarity in a seemingly endless discography, Secrets of the Sun documents a fruitful yet somewhat under-represented period in the storied career of iconic keyboardist and bandleader Sun Ra. Recorded in New York in 1962 at jazz workshop sessions, only Blast First's 1996 compilation Out There a Minute contains comparable material.

Originally based in Chicago, Sun Ra's Arkestra underwent a gradual conceptual evolution upon moving to New York City in 1961. Marking a transition in its development between the advanced swing of the early Chicago-era recordings and the increased free-form experimentation of its New York tenure, this album also reveals the first recorded versions of two Ra standards, "Friendly Galaxy" and "Love in Outer Space." Accessible, yet segueing into vanguard territory, this album highlights a fertile period in the Arkestra's history.

Looser and more aggressive than its Chicago recordings, these pieces find the Arkestra pushing at the limits of harmony and tonality. Ra's veteran saxophone line-up is vociferous on "Space Aura," as Marshall Allen, John Gilmore and Pat Patrick (on alto, tenor and baritone, respectively) spin an angular web of interweaving lines that ventures into outside territory. The heavily percussive "Reflects Motion" spotlights Gilmore's turbulent tenor, while Allen's mercurial flute and Patrick's rousing baritone make expansive statements on the closing opus "Flight to Mars."

Featuring the debut recordings of two of Ra's most enduring pieces, the otherworldly plaintiveness of "Friendly Galaxy" finds accord with the moody exotica of "Love in Outer Space." Guitarist Calvin Newborn's shimmering fret work is a welcome surprise on the former tune, while Gilmore's keening bass clarinet soars with serpentine grace on the later.

This is the fourth Sun Ra reissue in two years from Atavistic's Unheard Music Series, following Some Blues But Not The Kind Thats Blue (1977), The Night of the Purple Moon (1970) and Strange Strings (1966). A rare snapshot of the Arkestra as they shifted into more adventurous realms, Secrets of the Sun is a wonderful addition for avid Ra collectors and a perfect introduction for novices curious about one of the jazz world's most misunderstood geniuses.