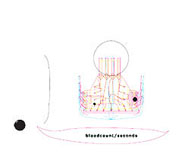 Nearly ten years after their last performance, saxophonist Tim Berne has resuscitated archival recordings of his influential group Bloodcount. The three-disc Seconds includes two concerts from 1997 and a documentary DVD from 1994. Hardly leftovers, the package boasts previously unavailable original compositions and the type of bristling performances that forged the band's reputation.

With songs rarely shorter than eleven minutes and several stretching to fifty, Bloodcount was a vehicle for Berne's extended compositions. The labyrinthine pieces tack from sublime delicacy to bombastic skronk and between tight ensemble passages and amorphous forays. With bassist Michael Formanek and then-nascent talents, tenor saxophonist and clarinetist Chris Speed and drummer Jim Black, Berne had a nimble unit to navigate and interpret the charts, imbuing drama and humor as necessary.

The music's density can seem daunting, but Berne leaves threads to bind the sections. "Yes, Dear" opens in chamber-like quiet, as tense clarinet and alto lines swirl amid arco bass. Berne flirts with dissonance, sustaining piercing notes; as the pace quickens, he and Formanek tease phrases that emerge as the foundation of the next section. Comparing the versions from the two concerts reveals different routes to reach the same mileposts. "Mr. Johnson" also snakes through dynamic and feel changes: from the manic, chirpy dual sax and stunt drums of the introduction to the slinky unison horn and funky groove of the head and an intense clarinet and drum break.

Formanek's extended bass introductions play the catalyst on two of the premiere tunes. He creates a suspenseful mood for "Sense and Sinsemilla," ushering in the saxophones, which take flight on an accelerated tandem line over fevered rhythmic pace. After about four minutes of percussive plucking on "Howmuch Longer," he settles into a bouncy line that Black joins for an almost danceable feel. Berne adds a quasi-R&B riff, with Speed's slightly out-of-phase countering, before the two trade in a freer section.

Eyenoises...the Paris Movie, directed by Susanna Schonberg, offers a glimpse of what it takes to execute this music. It captures the group rehearsing as a quintet with guitarist Marc Ducret, whose chordal washes and linear embellishments fill spaces left by the visceral quartet. The film lacks a specific narrative structure and contextual interviews. Instead, it offers an impressionistic glance of the group practicing and roaming the streets of Paris, set around the fifty-plus minute epic, "Eyecontact." They break down the piece, working through its various movements under Berne's laid-back yet encouraging guidance. Unfortunately, the camera favors extreme facial close-ups (particularly the eyes, in keeping with the titular motif), which distracts from seeing what, or how, the musicians are playing. Similarly, as the music gets going, the movie often cuts away to various street scenes.

Bloodcount still rewards careful and repeated listening. With an upcoming mini-tour and new compositions for the group, hopefully Seconds is the beginning of a next chapter.