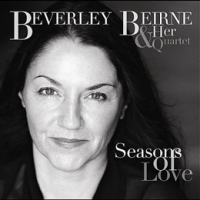 What gives a song the status of "standard"? One thing might be its popularity with musicians and fans. Most of the dozen songs on Seasons Of Love are standards that range from the popular to the extremely popular. Another characteristic may be a song's malleability: its capacity for almost infinite re-imaginings; a something that often gets forgotten, as singers rarely move outside the comfort zone of familiarity nearly enough. Beverley Beirne sticks to the familiar much of the time, albeit with style, but she's also willing to take a bit of a chance, a willingness that helps to ensure the success of this Yorkshire-based singer's debut.

Beirne follows a direct line from some of the finest jazz vocalists—her phrasing on Sam Coslow's "Beware My Heart" resembles Margaret Whiting, while her precise diction and lower register tone is close to Dame Cleo Laine. This is not to suggest that she's a mere copyist; rather, that she has taken care to learn from the best. There is an occasional harshness to her voice in its upper register, which could have benefited from some softening during recording, but she can swing and invest a lyric with honest emotion.

Pianist Graham Hearn, a fine accompanist, is responsible for most of the arrangements on Seasons Of Love. His arrangements are consistently high quality, sympathetic to the narrative and emotion of each song and making excellent use of the quartet's instrumental lineup. He keeps things simple on "You Must Believe In Spring," which also features some gentle brush work from drummer Ronnie Bottomley, along with bassist Ian Mann's quiet, fluid, line and Hearn's own piano underpinning of one of Beirne's finest performances. "Wrap Your Troubles In Dreams" gets a swinging, upbeat chart and a strong quartet performance. Tenor saxophonist Mike Cox is also a stimulating presence; his tight, precise, playing complements Beirne's voice whenever he appears, and he takes two outstanding solos on "Slow Hot Wind" and "Something Good."

When Beirne co-arranges, as she does on "Walk On By" and Richard Rodgers' "Something Good," there's a noticeably original approach to the lyrics of the songs, a shift in mood or narrative that really showcases a new perspective. On "Something Good," she eschews the oft-used apologetic approach, instead sounding almost proud of the "wicked childhood" that was eventually absolved by some occasional altruism.

One of the finest reworks of a classic song came from '70s rockers The Stranglers. The band's version of Bacharach and David's "Walk On By" was a snarling, contemptuous, attack—with one of the finest bass lines ever forced onto the American Songbook. Beirne's version isn't so radical (although, like The Stranglers, she makes no attempt to include the staccato rhythm guitar chords so central to Dionne Warwick's version), but her decision to slow things down and emphasize the lyric's intense sadness results in a truly memorable version of the song.

Beirne and her quartet have put together a tight, enjoyable, set of songs, a more than competent first outing. But it's her willingness to innovate and take new approaches to some of these classics,that really holds promise for the future and makes Seasons Of Love such a promising debut.

Beautiful Love; Beware My Heart; You And The Night And The Music; Happy Talk; Something Good; Slow Hot Wind; The End Of A Love Affair; Devil May Care; Walk On By; You're Looking At Me; Wrap Your Troubles In Dreams; You Must Believe In Spring.