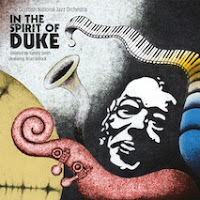 It had long been saxophonist Tommy Smith's dream to perform and record a live concert of music written by or associated with the great Duke Ellington. As leader of the acclaimed Scottish National Jazz Orchestra, Smith set about making that dream come true, and in October 2012 it happened, as an enthusiastic audience saw and heard a stellar performance In the Spirit of Duke by Smith and the SNJO, one that those who weren't lucky enough to be present that evening may now share thanks to this splendid recording.

While Ellington wrote (or co-wrote) and arranged much of the music, there are three excerpts from Finnish composer Edvard Grieg's Peer Gynt suite and King Oliver's "Creole Love Call," which is coupled with Ellington's "Black and Tan Fantasy" to open the concert. Billy Strayhorn arranged Ellington's "Prelude to a Kiss" as well as "Morning Mood" and "Anitra's Dance" from Peer Gynt (Ellington scored "In the Hall of the Mountain King"). Also on the program are three selections from The Queen's Suite, written and recorded by Ellington in 1959 to honor Britain's then-youthful Queen Elizabeth. At his own expense, he then had a single copy pressed and arranged for it to be delivered to the Queen at Buckingham Palace.

The concert closes with Ellington's triumphant encore at the 1956 Newport Jazz Festival, "Diminuendo in Blue" and "Crescendo in Blue," which together play for fourteen minutes. Also preceding the finale are the Duke's "Jack the Bear," "Daybreak Express," "Concerto for Cootie," "Harlem Air Shaft," "Sepia Panorama" and "Ko-Ko," as well as an exquisite duet for Smith's tenor and Brian Kellock's piano, "The Single Petal of a Rose," a medley of "Kinda Dukish" and "Rockin' in Rhythm," and another extract from The Queen's Suite, "Sunset and the Mockingbird."

To its credit, the SNJO embraces the "spirit of Duke" (to the extent that something so ephemeral can be redeemed) from the outset and nurtures it to the very end. Soloists are in the moment too, as Smith and Kellock coin phrases that would have left Ellington smiling with delight, as do alto Ru Pattison (showcased on "Prelude to a Kiss"), trumpeter Tom MacNiven (depping for Cootie Williams on "Concerto for Cootie"), trumpeter Ryan Quigley, baritone Bill Fleming, clarinetist Martin Kershaw, trombonists Paul O'Malley and Chris Greive, bass trombonist Michael Owers, bassist Calum Gourlay and drummer Alyn Cosker (who anchors the orchestra's Ellington-style rhythm section). While Smith's tenor sax is featured on "Crescendo" and "Diminuendo," he doesn't take the twenty- seven choruses that enshrined Paul Gonsalves at Newport, limiting them instead to only twenty-three. A bright and uproarious way to end an evening, leading to a prolonged (and it is assumed, standing) ovation.

Not much else can be said about the music, most of which is surely familiar to even the most dispassionate followers of jazz, and some even to those who know or care little about Ellington or his legacy. Suffice to say that Smith and the SNJO have succeeded admirably in reproducing the singular music of a bygone era and presenting it to a new generation of listeners, many of whom may not have had the pleasure of listening to Duke Ellington and his orchestra in person but can at least be entertained and enlightened as they bask In the Spirit of Duke.