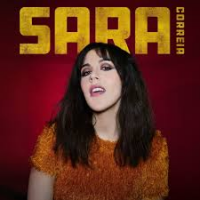 The late, great bandoneon player Astor Piazzolla famously said: "There is not one note of happiness in the tango." That is also true of fado, tango's Portugese cousin. Both are the Latin equivalents of African American blues: intense, cathartic expressions of anguish with, in their traditional forms, precious little light at the end of the tunnel. While the blues went on to produce a Saturday-night good-times strand with all its roots intact, tango and fado have not, though both have spun-off poppier, sunnier versions.

Sara Correia inhabits the middle ground between traditional, dark fado and its modern, lighter incarnation. In 2007, aged 13, she won the under-15s prize in Portugal's long established Grande Noite do Fado festival, and her husky high-contralto voice still projects the intensity of the roots music she grew up listening to. Her debut album—which has been a long time coming—sets her voice in a mainly acoustic instrumental setting which owes less to old-time fado music than it does to Mediterranean Gypsy music, an amalgam of Portugese, Spanish and French traditions. At times, listening to the lush and lyrical guitar playing of Correia's chief accompanist, Angelo Freire—who took first place in the over-15s instrumental category of the Grande Noite in 2004—you might almost imagine you are listening to Django Reinhardt.

This cheerful or, at least, bittersweet vibe is enhanced by the material Correia is singing. The mellifluous toplines owe more to French chanson than they do to fado. Indeed, at times the ghost of Edith Piaf seems to have joined that of Reinhardt. It all adds up to a thoroughly enjoyable 40 minutes of music—not a description that fits many fado albums, profound expressions of angst though they may be.