Home » Jazz Articles » The Cracow Klezmer Band: Sanatorium Under the Sign of the Hourglas...

The Cracow Klezmer Band: Sanatorium Under the Sign of the Hourglass

By Eyal Hareuveni
January 22, 2006
Sign in to view read count 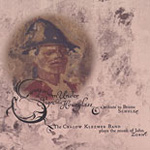 John Zorn's Masada songbooks have surrendered themselves to many modern genres and styles—free jazz with the original Masada Quartet, contemporary improvised music with the Masada String Trio and the duo of Mark Feldman and Sylvie Courvoisier, 1970s electric fusion meets today's electronica with Electric Masada, power rock with Rashanim, and a dozen others in the various tributes to the first Masada songbook (Masada Guitars; Voices in the Wilderness; and The Unknown Masada, all Tzadik, 2003). But only now, with the release of the Polish Cracow Klezmer Band's fourth disc on Tzadik, are they interpreted in the Old World Eastern European klezmer form. Many Masada interpretations have referenced, abstracted, or suggested new readings of this genre which is so identified with Jewish music.

The four members of the Cracow Klezmer Band—leader, arranger, and bayan (accordion) player Jaroslaw Bester; violinist Jaroslaw Tyrala; bayan player, clarinetist, and percussionist Oleg Dyyak; and violinist Jaroslaw Tyrala—are augmented by singer Grazyna Auguscik, who has collaborated with them before, not only to tackle John Zorn's Masada Songbooks One and Two, but also to use these tunes to paint a heartfelt tribute to the Polish-Jewish writer and artist Bruno Schultz (1892-1942), whose character still inspires contemporary writers like the Israeli author David Grossman (See Under: Love) and Americans Cynthia Ozick (The Messiah of Stockholm) and Phillip Roth (The Prague Orgy). This release is named after Schultz's second collection of short stories, published in 1936, and its official title is The Cracow Klezmer Band plays the music of John Zorn—Sanatorium Under Sign of the Hourglass: A Tribute to Bruno Schultz.

The Cracow Klezmer Band's beautiful arrangements are faithful to the original versions. In the opening track, "Meshakh," and on "Regalim," these four musicians even manage to capture the same dynamic telepathic coordination that is so identified with the original Masada quartet. But soon as Tyrala begins his magnificent solo on "Galgalim," you realize that their music is more faithful to the klezmer tradition than any other Masada incarnations or interpretations: klezmer music as a high art concert music that must be performed with subtlety, finesse, and great passion.

"Tirzah," with Auguscik's dreamy wordless vocals, and "Hamadah" both succeed in capturing the sensual atmosphere of Schulz's fantastical stories. Tyrala introduces "Adithaim" with a virtuosic, lyrical violin solo, slowly turning the piece into a gentle dance tune. "Pagiel" is the only tune from Zorn's second Masada songbook, Book of Angels, and is performed as a passionate Astor Piazzolla tune. "Meholalot" is interpreted slightly differently than the version the Cracow Klezmer Band did on Voices in the Wilderness, this time stressing its driving rhythms, as its Hebrew title suggests, and highlighting the captivating vocals of Grazyna Auguscik.

A brilliant release that blends Old World with New World, an almost vanished culture with a vital resurrecting one, by one of the world's most extraordinary new klezmer outfits.

Title: Sanatorium Under the Sign of the Hourglass | Year Released: 2006 | Record Label: Tzadik