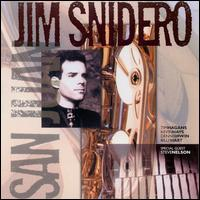 More RED. On San Juan, 39 year old Alto saxophonist Jim Snidero leads a quietly powerful sextet that deftly executes seven of his compositions plus the Kenny Dorham chestnut, “La Mesha”. Of note on this 1994 release is trumpeter Tim Hagans, who in the last year has become hot enough to accelerate global warming. Most notable to the overall sound and mood of the disc is the presence of Steve Nelson on vibes.

Good Vibrations. The vibraphone is a most unique instrument providing a most unique sound. Its presence in an ensemble can lend even the hottest group a bruised spice leaf sound, a floating essence, and a perfumed distillation of music. His contribution to the first four compositions, most particularly the title track, is considerable and understated, setting an overall mood of intelligence and warmth.

Brainy Music. Snidero is an adept composer and performer. He plays well with other cerebral players such as Hagans, making this collaboration a very successful (and enjoyable) one. His round, well-formed tone meshes well with Hagans’ slightly more aggressive attack. Taken as a whole this ensemble has produced a better than average Post Bop recording for a dependable foreign label with a reputation of recording and providing such music. Music such as this is always worth checking out.

Introspect; San Juan; Mystery; The Web; Forward Motion; La Mesha; In A Daze; To Whom It May Concern (Total Playing Time 55:47).