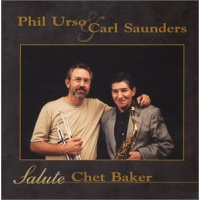 Phil Urso won’t remember this, but many years ago—nearly half a century, in fact—I heard him playing in a small club in Washington, DC, and was so impressed that I approached him after the gig and said he sounded to me like Zoot Sims. I made his day then, and now I’d like to give it another try. Urso and trumpeter Carl Saunders have joined forces to sculpt this warmhearted tribute to the incomparable but self-impaled Chet Baker, and although Phil no longer sounds like Zoot, and Carl sounds nothing at all like Chet, they have cooked up one of the most appetizing albums of the year, one that also marks a spectacular debut for Graham Carter’s new Jazzed Media label.

Unlike others who were obliged to appreciate Baker’s artistry from afar, Urso co-led the Chet Baker/Phil Urso Quintet in 1955-56, and he was a natural choice to assume a leading role in this magical salute. Saunders—who plays as many notes in thirty seconds as Chet was likely to play in thirty minutes—seemed a less likely partner, but as it turns out, Carl honed his writing and playing skills as a young man by transcribing a number of Baker’s charts (including some by the Baker/Urso Quintet), was a long-time admirer of both men and eager to round out the group whose splendid rhythm section is comprised of blue-chip musicians from the Denver area, where Urso has lived for many years.

Although Urso, who’s remarkably bright-eyed and bushy-tailed in his seventy-eighth year, hadn’t recorded since 1986, there are few signs of rustiness as he quickly asserts himself on Al Haig’s boppish “Jumpin’ Off a Clef,” on which he trades unerring four-and two-bar licks with the mercurial Saunders. Urso’s tone and delivery have moved closer to Hank Mobley‘s, which isn’t a bad place to go, and he’s a masterful foil for Saunders whose dexterity and seemingly endless flow of eloquent phrases is nothing short of awesome. And to his further credit, Carl chooses not to sing on Chet‘s signature tune, “My Funny Valentine.”

Besides the songs already mentioned, the quintet enlivens two of Urso’s sparkling compositions (“Halema,” written for Chet’s then-wife, and “Way to Go”), two more by Hal Galper (“Mister B,” “This Is the Thing”), Jimmy Heath’s “For Minors Only,” Richard Carpenter’s “Baby Breeze,” Frank Signorelli/Miff Mole’s “Worryin’ the Life Out of Me” and Mobley’s descriptive “Funk in Deep Freeze” before closing, quite appropriately, with the gentle “Line for Lyons,” written by Baker’s mentor and alter ego, Gerry Mulligan. Each of the songs was recorded by Baker during his lengthy but spasmodic career.

For musicians who hadn’t even met before, let alone played together, Urso and Saunders bond immediately, creating a partnership that seems more long-lived than newly formed, as does their worry-free alliance with pianist Keith Waters, bassist Colin Grieg and drummer Paul Romaine. A superlative album by any measure. No doubt Chet would have been thrilled.

Jumpin' Off A Clef; For Minors Only; Halema; Mister B.; This Is The Thing ; Funk In Deep Freeze; My Funny Valentine; Baby Breeze; Way To Go; Worryin' The Life Out Of Me; Line For Lyons.