Declared Enemy: Salute to 100001 Stars: A Tribute to Jean Genet

By SEAMUS SEOIGHE
June 1, 2007
Sign in to view read count 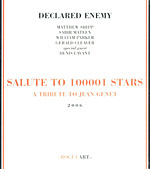 Jean Genet was born the illegitimate child of a prostitute who spent a majority of his youth wandering between the prison systems of Europe for theft, smuggling and male prostitution. As a writer, he was noticed by Jean-Paul Sartre through whom he was able to achieve some popular support, but throughout his life he would remain an outsider to a world looking in. It is this outsider-as-artist quality in Genet's work that bandleader Matthew Shipp cites as a primary influence on his own artistic perspective. The world is full of symbols which the artist is free to extract to his own isolated place of mind and re-fabricate for his own purposes. For Genet, these symbols involve sexuality and death. For Shipp, they involve constructs of musical creation. And to these artistic intentions, for Salute to 100001 Stars Shipp presents nine intricate selections of music: seven instrumentals and two spoken word performances of Genet's work that push and pull at the listener with a creative force all his own.

Indeed all of the members of Declared Enemy, including frequent Shipp collaborator William Parker (bass), Sabir Mateen (clarinet and alto sax) and Gerald Cleaver (drums) have made careers out of abandoning the traditional routes of mainstream jazz. (Mateen can be spotted giving impromptu performances of free music throughout the New York City subway system with the quartet Test.) All a very appropriate cast of characters to pay tribute to the French poet/playwright/novelist.

Throughout the album's nine pieces, deft use of loose motivic frameworks guide the free improvisations, pulling the album together to have an impact more like that of a suite than nine individual tracks. "Chicago 68," the opener, is a rhythmically flurrying duet between Parker and Cleaver that conjures the impression of a tangled African drum circle, a perfect introductory call to arms. The second track is a spoken performance of Genet's poem "Marche funèbre" by Denis Lavant. For the next five instrumental tracks, Shipp is careful to underlay each song with its own unique stylistic foundation for improvisation, ranging from the delicately chromatic "Flowers" to the hard-edged groove on "Black Panthers." "Metray" is sparse and jagged, with Shipp utilizing his unique technique of "ghosting" notes, hitting the keys for a split second and capturing the reverberations in the soundboard with the sustain pedal so that the initial sound has disappeared but the remnants linger eerily in the air.

What better way to close this thoughtfully assembled suite of music than with a track entitled, "Larache," named for Larache, Morocco, Genet's burial place. Matthew Shipp and Declared Enemy definitely find musical inspiration that reaches outside the lines of conventional jazz. With their homage to Jean Genet they present an album that pulls the listener beyond the conventional expectations of music as well.