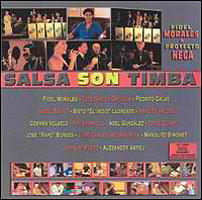 When Fidel Morales returned to Havana in 2004 after an extended stay in Panama, and traveling the world as a master drummer, he had an exact focus on the type of record he wanted to produce. Salsa Son Timba is the result of gathering some of the finest musicians and singers in Cuba to realize his musical vision. Originally produced in 2005, Morales has rereleased it in 2010.

Salsa Son Timba is exactly what the title describes: a blend of the three genres associated with Afro-Cuban music. With an insider's knowledge and access, the experienced musicians were all handpicked by Morales, as were the singers he wanted on the individual tracks. This recording was done in Pablo Milanes' studio in Havana in a marathon five hour session, with the group performing original arrangements of Cuban gems as the Orquesta Aragon's charanga "Para Cochero," "Que Manera de Quererte" (a smash hit for Albita), and the Buena Vista Social Club classic, "El Chan Chan Son," in which an urban/rap vocal is effectively utilized for a modern approach.

Aside from playing drums, producing and arranging, Morales composed five of the songs, including: "Atrevete," featuring singer Tania Pantoja; "Remedio de Amor," with Juan Carlos Hechavarria; and "Mamina," the album's standout number, with an arrangement reminiscent of the traditional Cuban dance orchestras, and showcasing vocalist Teresa "Tete" Caturla, a contemporary of Omara Portuondo and a Havana legend in her own right. Morales' closing title track is a prime Cuban descarga, in which all of the lead singers join with the musicians in getting some of the action.

The authenticity of production shines throughout the record, and leaves no doubt as to how this music should be played. The musicians and singers simply do what they do best, and the final outcome is superb.