By DAVID RICKERT
November 3, 2009
Sign in to view read count 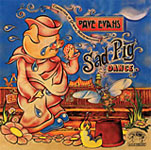 One way that guitarists expand the harmonic possibilities of their instrument is through the use of open tunings. By tuning the guitar differently than the standard EADGBE arrangement (for instance, to an open chord), a whole new world of sounds and textures becomes available.

New age guitarists were quick to adopt this method to create beautiful melodies that went nowhere. Dave Evans, however, was one who coupled his love for open tunings with his knack for writing good songs and came up with a terrific album in Sad Pig Face, originally released in 1974 at the height of the finger-picking guitar movement. Evans is a minor figure on a scene dominated by Davey Graham, Bert Jansch, and others, and this is about all the recordings of his currently available. However, this is quite an album to rest his legacy upon, a near perfect recording full of strong melodies and nimble playing.

Evans manages to take a slew of diverse influences, from blues to rock to jazz and meld them into a style that never seems disconnected. Evans' pieces are frequently lyrical and whimsical, form the playful "Chaplinesque" to the unconventional "Morocco John." "Stagefright" is the rare long guitar instrumental that never wears thin and "Jessica" foreshadows the ambling musing of new age guitarists a decade later (yet in a much more interesting way.) There are twenty-three songs here, all of which demonstrate the vast range of possibilities for folk guitarists to explore. Those who play the guitar will be pleased to know that tablature for eleven of the songs here is included for study.

Sad Pig Dance is a marvel of an album, the kind that is so good it transcends its genre and just becomes good music. It's an odd title for album so filled with pleasures.