BY DOUG COLLETTE
September 14, 2019
Sign in to view read count 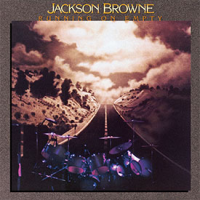 There is no other album quite like Running On Empty in Jackson Browne's discography. But then, there may be no other album comparable in contemporary rock: it is an absolutely unflinching portrait of an artist looking for a connection to the muse and only fleetingly establishing one. In a sense, this 1977 album resides at the opposite end of the creative spectrum from the masterwork Late For The Sky (Asylum,1974) wherein this archetypal singer/songwriter captured an early peak of excellence as a songwriter and recording artist in the recording studio.

Through material never before released at the time, recorded on-stage during concerts, in hotel rooms, on the tour bus, and backstage, Jackson Browne also demonstrates the well-honed skills of a bandleader. With the intuitive participation of his group of the time, he illuminates the dichotomy of those precious few hours on stage in front of an audience with the dreary, laborious and altogether mundane aspects of the life of a touring musician's (and crew too). this quientessential folk-rocker refused to indulge in the hoary cliches of road songs, even in directly describing it in "The Load-Out." During this dramatic conclusion the singer borders on the desperate but remains altogether affectionate in its entreaties to the audience to forestall their separation.

The album concept of Running On Empty involves the channeling of inspiration through sheer force of the will. It is indicative of Jackson Browne's somewhat barren reservoir of creativity that only a small handful of major original songs appear here and, with the inclusion of "The Road," not all of them are his own (and only two of which he composed by himself). The doleful tone in this arrangement of the latter Danny O'Keefe song emanates from the pirouettes of Craig Doerge's electric piano around David Lindley's violin and also echoes most resonantly in one of four composing collaborations, "Rosie" recounts the all-too inevitable outcome of a failed liaison

It's a far cry from the thrust drummer Russ Kunkel applies to the title song, whereby he and bassist Leland Sklar help generate an almost celebratory air. That uplifting atmosphere, further elevated by guitarist Danny Kortchmar's insistent rhythm playing, is fully in keeping with the detail of the lyrics as sung so defiantly by the Browne. The sound of "You Love The Thunder" lies in between, much like its words, ostensibly to a third party but just as applicable to its author; the dulcet tones of background singers Doug Haywood and Rosemary Butler accentuate this role-playing, while Lindley's caustic lap steel cuts to the quick even more deeply. Meanwhile, the sparse "Nothing But Time" accentuates the isolation that often muffles the camaraderie within an entourage (it was actually recorded on the tour bus enroute).

The tongue-in-cheek falsetto from the master multi-instrumentalist at the end of the concluding "Stay" only renders more direct and honest Browne's forthright petition for a bond with his listeners . It's the polar opposite of the insularity of "Cocaine," where Browne contemporizes Rev. Gary Davis' ode to the toxic substance and finely-picked acoustic instruments punctuate the point of the frontman's somewhat wan delivery. The jocular repartee he shares with other performers of the entourage following the performance itself only render more solitary the emotional self-portrait of "Love Needs A Heart." This entire septet performs in such diverse settings as empathetically as Jackson could ask.

One might've wished for some retrospective history on the novel concept and execution of the album included in the enclosed booklet alongside the lyrics and photos (the specific locations of the respective tracks are readily available on-line). Such content would conceivably illuminate the realism of the touring scenario as much as the remastering of Gavin Lurssen and Reuben Cohen (though this front cover oddly lacks the clarity of the CD/DVD set release in 2005). The initial commercial success of this record aside (not to mention the advent of streaming and vinyl platforms in the interim), this is the only other title of Browne's he's chosen to digitally remaster and release on his own Inside Recordings imprint—that is, not surprisingly, besides the aforementioned third album of his from nearly a half-century past.

Those minor caveats aside, it remains a fact this archetypal singer/songwriter had to make Running On Empty so that, later on in his career, he could make The Naked Ride Home (Inside Recordings, 2002),Time The Conqueror (Inside Recordings, 2008) and Standing in the Breach (Inside Recordings, 2014). A triumvirate of artistic renewal arguably on par with that of Bob Dylan with Time Out Of Mind (Columbia, 1997), "Love And Theft" (Columbia, 2001) and Modern Times (Columbia, 2006), the various skills Jackson Browne demonstrated over four decades ago are those he brought to bear on those three titles of the 2000's and ones he continues to wield today with such understated yet resolute panache.

Running On Empty; The Road; Rosie; You Love The Thunder; Cocaine; Shaky Town; Love Needs A Heart; Nothing But Time; The Load-Out; Stay.