BY JOHN KELMAN
September 6, 2008
Sign in to view read count 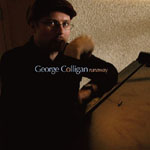 Over the course of a career, relationships are made, with an artist's network growing ever larger. George Colligan—keyboardist of choice for artists including Don Byron, Buster Williams and The Mingus Big Band—has built a circle of friends larger than most, drawing upon them for Runaway, his Sunnyside debut, a logical follow-up to Blood Pressure (Ultimatum, 2006). Blood Pressure was a more eclectic affair, drawing on two separate rhythm sections and a couple of guests; Runaway is a more consistent group effort, with drummer E.J. Strickland and bassist Josh Ginsberg back from Blood Pressure, and guitarist Tom Guarna returning from Colligan's fusion group, Mad Science, and Realization (Sirocco, 2005).

A fixed line-up provides a solid identity throughout an album almost as catholic as Blood Pressure. Guest Kerry Politzer subtly delivers Colligan's words on the lyrical ballad "When I Go," sounds like a younger Norma Winstone on the equally gentle but more structurally complex "Forlorning," and plays piano on the elegantly swinging "Innocent Youth," where Colligan proves he's as capable with a horn as he is a piano.

Like Blood Pressure, Runaway is largely a trio affair, with Guarna featured on five of the disc's eleven Colligan originals. He's in Mad Science mode on the soulfully fusion-esque "The Righteous," his dense, overdriven tone a strong foil for Colligan's Fender Rhodes and synthesizer. But while his work on Realization often approached reckless abandon, here he's more reined in, still navigating the changes with aplomb as Strickland and Ginsberg (heard, for the only time, on electric bass), bring out some serious funk.

Elsewhere, Guarna's contribution is more delicate, trading in his electric axe for an acoustic one on "When I Go" and the Latin-esque and appropriately titled "Be Gentle." "R U Things The All?" mixes a funk/fusion head with a more swinging middle section. Guarna's warmer, hollowbody electric tone again navigates Colligan's twists and turns on this knotty retake of the classic standard, "All the Things You Are" while applying the same sound to Colligan's "Skeletons in the Closet," one of the pianist's most oblique compositions to date, a combination of free interplay between Colligan and Guarna, and an abstruse theme based around a five-note motif.

Colligan's own playing continues to support why he's in such demand. "End of a Dynasty" and "Ghostland" are modal workouts that feature strong acoustic solos, while his a capella opening to "Waltz For All The Things We Meant To Do And Never Did" sets up this graceful, medium-tempo waltz for a rare but effective solo from Ginsburg. The title track, another contemporary mainstream tune with a challenging construction, gives Colligan a final chance to shine with a solo of stunning virtuosity.

With a growing discography as a leader since 1996, Colligan is an artist waiting to be discovered beyond the smaller confines of those in the know. With a larger label and better distribution, hopefully the impressive Runaway will be the one to do it for him.

End of a Dynasty; The Righteous; When I Go; R U Things The All?; Be Gentle; Skeletons in the Closet; Forlorning; Ghostland; Waltz For All The Things We Meant To Do And Never Did; Innocent Youth; Runaway.