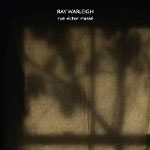 Remarkably, this is saxophonist Ray Warleigh's second solo album; his first—ingeniously entitled Ray Warleigh's First Album (Philips, 1968)—was produced by none other than Scott Walker. In the intervening years, Warleigh has been an active session player, appearing on albums as diverse as Nick Drake's Bryter Layter (Island, 1970), Soft Machine's Bundles (Harvest, 1975) and The Dedication Orchestra's Spirits Rejoice (Ogun, 1992).

Along the way, Warleigh has been in various ensembles with Evan Parker, hence this release on Psi, which was recorded in a Paris apartment on a mini-disc in October 2004. Although he receives sole billing, Warleigh is paired with long-time Parker associate, drummer Tony Marsh. In contrast to that first album which consisted largely of smooth cover versions (it opened with "The Look of Love") this one is mainly improvised, the exception being an impressionistic version of "I Fall in Love Too Easily."

Generally, improvising saxophone and drums duos make great demands of both players and only succeed if both are top notch. It reflects well on Warleigh and Marsh that this album is an unqualified success, remarkable given Warleigh's reported remark: "What I play is absolutely unpremeditated. There are no soundscapes or pictures in my head. But I like melody very much, and I've thought about it a lot." That sounds like a good starting point for an improvising saxophonist... if not for a session player.

In the event, Warleigh proves that he does like melody and is adept at spontaneously generating coherent, flowing melody lines out of thin air. He does so without resorting to the trick of quoting phrases from well-known tunes, giving his lines a sense of freshness and originality. Whether on alto sax or flute (throughout, he alternates the two with equal facility) his tone is full, rich and he plays with confidence.

Marsh perfectly complements Warleigh, always divining exactly the right rhythm and texture to support the nascent melodies and providing them without undue drama; as a support player he is without fault, never stealing Warleigh's thunder but making him sound as good as possible. The longest track (at twelve minutes), "For Flute and Percussion," does acknowledge that this is a duo and is notable for Warleigh's use of flute throughout; it is one of many highlights for both players, with Marsh's subtle tom-tom and cymbal work being an ideal setting for the fluid flute.

Blues and; Nothing but; The Other Side; New Moon; Prayer; I Fall In Love Too Easily; For Flute and Percussion; Inner Ray; Standards and Blues; EnFin.