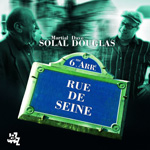 Here's a meeting of minds. For all of their stylistic differences, Dave Douglas and Martial Solal pull off the not inconsiderable feat on Rue De Seine of accommodating each other at the same time as they retain their own distinct musical identities. In an ideal world this should of course place quite naturally in the field of improvised music, but such is the quality of this release that, among other things, it reminds the listener just how infrequently this happens in reality. Douglas tempers his usual fire with an unusual degree of reflection, and Solal accommodates the trumpeter at the same time as he retains the creative vision he has developed on record with everyone from Sidney Bechet to Lee Konitz.

The fact that Douglas and Solal pull off this feat within the arguably demanding setting of a trumpet and piano duo is also notable; despite all the idiomatic differences, perhaps the only precedent in this admittedly small field is the duo of Ruby Braff and Ellis Larkins, and it would be nice to think that Douglas and Solal are destined to record together as much as that duo did.

Rue De Seine has none of the contemplative air that some might associate with the duo format. Even "Fast Ballad" is suffused with a depth of musical intelligence that skilfully bypasses the obvious. The same is true of the four standards. Of these, the musicians' reading of "Have You Met Miss Jones?" best celebrates their differences and their ability to come together. It's here also that Solal arguably offers the firmest evidence of why he has been celebrated in certain quarters for a long time. "Here's That Rainy Day" works well because both musicians clearly understand and have an appreciation for the value of understatement.

Of the originals that make up the balance of the programme, Douglas's "Blues To Steve Lacy" captures the essence of the lamented giant, to such an extent that the listener can easily conceive of the man himself negotiating his way through the piece's plangent melody.

These players know how to work together to such a degree that the absence of other musicians is irrelevant. Their results are worthy of the closest listening, not least because there is such an abundance of musical values in evidence.

Visit Dave Douglas on the web.

July Shower; Blues To Steve Lacy; 34 Bars Blues; For Suzannah; Fast Ballad; Elk's Club; Have You Met Miss Jones?; Body And Soul; Here's That Rainy Day; All The Things You Are.