By Edward Blanco
February 14, 2016
Sign in to view read count 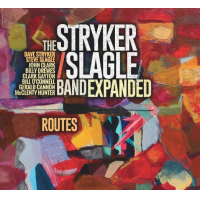 Long-time friends and collaborators, guitarist Dave Stryker and saxophonist Steve Slagle have been developing their sound for almost two decades and have led their band on several recordings. Throughout their enduring association, The Stryker/Slagle Band has produced some of the best contemporary jazz heard anywhere. On the audacious Routes, their sixth album as a group, the band continues their journey through a landscape of bop, hard-driving grooves and swinging rhythms of the kind that have often defined their unique sound. Except for the gorgeous soft rendition of the Charles Mingus ballad, "Self-Portrait in Three Colors," the repertoire presents a selection of originals from the duo releasing the kind of musical energy the band is known for.

What is very different in this recording that separates this band from their classic quartet groups of the past is, an augmented cast of players to include keyboards and three additional horns creating a three and four-piece horn section on several tracks. The band's core rhythm section of bassist Gerald Cannon and drummer McClenty Hunter are backed up for this project by guests' pianist extraordinaire Bill O'Connell and saxophonist Billy Drewes among others.

Slagle sizzles with a solo intro on the beginning original "City of Angels" followed by riffs from the guitarist and some nice key work from Latin jazz piano man O'Connell. The following Stryker original is so appropriately titled because "Nothin' Wrong With It" describes the essence of this tune, there's really nothing wrong with this one, it's all good. The swinging Stryker title track features the guitarist on some of his best solo riffs of the session but still leaves room for his musical partner to float the alto with some hot sounds of his own on a terrific melodic tune.

Penned for the Brooklyn, NY neighborhood where he once lived and first collaborated with his co-leader, Slagle's "Ft. Greene Scene" is a funky-like deep grooving piece with a lot of soul in stark contrast to the almost solemn-sounding and haunting "Great Plains" composed by the guitarist in a tip of the hat to his Midwestern roots. The band turns up beat once again on the explosive "Extensity," clearly one of the liveliest burners of the albums then, delivers the defining piece of the date on the evocative homage to Los Angeles with the Slagle original "Gardena."

Paying tribute to some of the places that have left an influence in their lives, Dave Stryker and Steve Slagle lead The Stryker/Slagle Band (Expanded) on a musical road map of swinging, creative and dynamic fresh music that makes Routes an assertive musical statement that's hard to ignore.