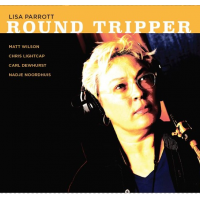 More than ten thousand miles separate New York and Australia, but saxophonist Lisa Parrott's music bridges that gap. On Round Tripper, the Australian-born, New York-based Parrott makes music that speaks to her connections to both locales and the bonds that she's made in both places over the years.

Round Tripper finds Parrot working with an integrated American-Australian outfit: Omnipresent drummer Matt Wilson and bassist Chris Lightcap represent the former category while guitarist Carl Dewhurst, one of Parrot's frequent collaborators, and guest trumpeter Nadje Noordhuis, another Australian-turned-New Yorker who works with Parrott in the DIVA Jazz Orchestra, represent the latter. Together, these musicians cover a tremendous amount of ground. Parrott and company reference Ornette Coleman by covering his "Round Trip" and working a harmolodic angle on Bernie McGann's "D. Day"; they touch down in Brazilian territory on "Um A Zero," marrying the spirit of choro music and samba along the way; they strip away the excess drama associated with "Waltzing Matilda," giving the unofficial Australian national anthem a heartfelt reading that avoids sappiness; and they touch on smoky balladry, as Parrott's baritone saxophone and Noordhuis' flugelhorn both provide plenty of warmth. Believe it or not, the album runs less than forty-five minutes, but there's a lot to digest in such a short time.

While Parrott's cross-cultural band and the stylistic diversity of this music both prove to be noteworthy, the real story is about Parrott's alto work and her chemistry with Dewhurst. Those who only know Parrott as a ballasting bari player have a lot to learn. She gives that heavy horn a few spins here, but it's her adroit maneuvers on alto that delight more often on this one. And when her alto joins forces with Dewhurst, there's magic in the air. Their dialogue during "Rosa Takes A Stand" takes the song to another level, their back-and-forth banter and imbricating lines on "Dancing Laughing" elevate the music, and they finish each other's phrases and sentences during "Um A Zero." They're a pefect match and Round Tripper is the proof.