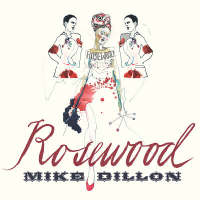 Texas-born Mike Dillon moves in as many different directions as his varied skills allow. Witness his work with, among others, Garage a Trois, Critters Buggin' and Nolatet. Yet none of his adventures are as satisfying as when he adheres to his niche as vibraphonist/percussionist, so Rosewood makes a suitable companion piece to the similarly conceived and executed Functioning Broke (Royal Potato Family, 2016).

As a matter of fact, Rosewood is almost a direct extension of that album. A tour de force of melody and rhythm, right from its alternately fun and foreboding opener, "Tiki Bird Whistle," the idiosyncratic musician interweaves those two components in such a way they remain inextricably intertwined with each other for the duration of this thirteen-track, forty-five minute-plus record. In fact, it's well-nigh impossible not to fall under the spell of the music Dillon creates virtually all by himself on this album: there's a deeply dream-like quality emanating from "Beignet's Bounce" and an even more resonant glow during "Mulatu Goes to India."

Like the warm sound of the vibes there, multiple touches of percussion are insinuating on the latter track as well. And further along the way, tracks such as the covers of Trent Reznor ("Hurt") and two of Elliot Smith ("Talking to Mary" and "Can't Make A Sound") underscore the depth of sound recorded and mixed by Chad Meise. As a result, even the more insistent likes of "Drone" (with Earl Harvin on drums and cymbals) remains inviting, in part because Dillon injects the same level of ornate detail there as within "Vibes At The End Of The World."

That said, even as Dillon plays almost all the instruments himself on Rosewood, he restrains himself from becoming too busy. That very self-discipline that allows the ethereal tones of vibes, marimba, xylophone and bells, among others, to sustain and hang in the air on the aforementioned Nine Inch Nails' cover. That is, until the next instrumental sounds ensue, in a decidedly jolly, sing-song quality for the duration of "Rhumba For Peregrine." Therein lies one of the most conventional progressions on this record and, as if Mike Dillon didn't want that particular element to pass unnoticed, a similar fluidity permeates "Earl's Bolero."

The cryptically-titled "Sober On Mardi Gras" likewise passes in quick succession, along the way to the ironic closing of "Can't Make A Sound." It may well be that, as he composed and recorded this disc in Kansas City, Mike Dillon was as caught up in the extended spirit of the moment(s) as listeners to the record will be. And with this cover art by Peregrine Honig, Rosewood doesn't just call to mind Dillon's prior record, but also one of his other most memorable collaborations, that is, the GAT's Power Patriot (Royal Potato Family, 2009). The unity of purpose evident there, as with Mike's aforementioned collaborative efforts, is rapidly becoming a hallmark of this iconoclastic musician's body of work.