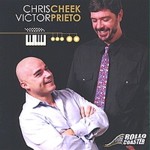 While all musical settings present different challenges to those involved, duo recordings can often be the hardest to manage well. Repetitive textural elements, characteristic of the instruments on hand, can create a certain similarity across all tracks. Some musicians fall prey to wandering free improvisation, finding various degrees of success or failure, as they try to navigate these waters and avoid unpleasant encounters with the only other musical voice on the map. Thankfully, that is not the case with saxophonist Chris Cheek and accordion player Victor Prieto on Rollo Coaster.

Cheek and Prieto began performing together in 2006, as part of Emilio Solla's New York Jazz Tango Project, and they forged a deep musical connection. They eventually began performing as a duo, and they speak the same language throughout this recording. The album title here plays off of the Spanish phrase "Buen Rollo," meaning "cool vibe," and the music certainly merits this descriptor. Throughout these fourteen tracks, Cheek and Prieto demonstrate great versatility and establish a consistent vibe, despite navigating their way through different stylistic waters.

Prieto seems to conjure an entire orchestra of sound from his accordion. Sometimes he plays to the traditions of tango, providing a seductive and intriguing blend of sounds ("Rolocoster"), while other moments give him the opportunity to provide a cushioned harmonic blanket for Cheek ("Los Recuerdos"). Prieto even provides some organ-like accompaniment on the somber, classically influenced "Shelter." When he's not providing the harmonic foundation of a song, he is often providing some cajón-like percussive tapping ("Six Note Samba"), doubling the melody lines with Cheek while providing some horsepower from below or playing some warp-speed solo runs.

Cheek, on soprano saxophone, provides the more freely open and spacious solos. While he jumps and flies along with Prieto on the more upbeat, pan-Latin material here—like the joyously spirited "Rosa" and "Bebe"— he takes a different approach to the slower pieces. Though his overall sound doesn't vary much throughout the album, his saxophone takes on a clarinet-like quality during certain moments on the title track. His broken phrases gel into cohesive statements on "Six Note Samba" and he demonstrates a conception based on greater freedom during "Papa Pin." He even provides some wonderfully playful runs on "Memories." Three improvised tracks make their way into the program and, to the credit of Cheek and Prieto, these instant creations largely come across as cohesive, absorbing works. While this musical pairing was forged in tango territory, this music crafted on this album goes well beyond that one particular style.