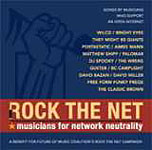 Lately jazz artists have admitted to listening to the music of their own time. Surprised? Brad Mehldau covers Radiohead and The Bad Plus play Nirvana. But that's not current news. Miles loved "Surrey with the Fringe on Top" and, of course, John Coltrane fans called out for him to play "My Favorite Things." Popular culture is unavoidable, even if only listening to American public radio.

This compilation project, although not definable as jazz, is an infectious survey of creative pop music for a worthy cause. Rock The Net was produced to draw attention to the importance of net neutrality and the fight to stop large corporations from placing specific fees to access the web, attaching higher costs to provide large content by smaller sites. Like from small new bands and, well, jazz musicians who are currently on equal footing with the big boys. An open internet allows for greater expression and access to all.

Pianist Matthew Shipp's "New Orbit," with his trio of William Parker and Gerald Cleaver, is a highlight, as are Free Form Funky Freqs (aka Vernon Reid, Jamaaladeen Tacuma and G. Calvin Weston) with "The Binds That Tie" and the DJ Spooky-composed "Uganda," for Spooky and the rapping Saba Saba.

Elsewhere there's an infectious summer hit, "31 Today," by Aimee Mann that sticks in the head in a good way, a live version of Wilco's "Impossible Germany" and They Might Be Giants' "We Live In A Dump," delivered in its shiny pop style.

There are some new names to investigate, including Guster—which has the flavor of Yo La Tengo—Bright Eyes, The Wrens and The Classic Brown, though they may already be known to some from their presence (unimpeded, for the time being) on the net.

About Various Artists / Future of Music