BY FREDERICK BERNAS
September 28, 2007
Sign in to view read count 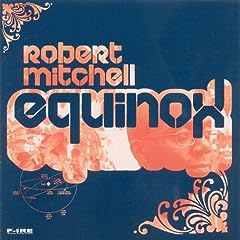 British pianist Robert Mitchell, yet another distinguished alumnus of bassist Gary Crosby's Tomorrow's Warriors development programme for young British jazz musicians, throws up many questions on his ambitious solo release Equinox. Performing alone is not unusual to Mitchell: as recently as 2004 he played opening recitals for saxophone luminaries Wayne Shorter and Branford Marsalis.

The launch gig for the new album took place on September 15, 2007. It was part of Lifting The Lid, a three-day festival celebrating modern solo piano, curated by Mitchell. Taking place at London's Pizza Express Jazz Club, the line-up included Django Bates, Bheki Mseleku and Zoe Rahman among other pianists.

According to the press release, Equinox contains a common philosophical thread as a suite of prayers for peace and balance. Musically it is far more complicated. The set opens in a ponderous manner, with Mitchell providing a cautiously conservative overture on "Agenda For Change, an improvisation built around seven notes. The track continues in the same vein, with rippling bass chords and tinkly little right-hand lines moving into a bolder, more percussive phase that fades away for the ending. Mitchell displays impressive sensitivity, but it's very clear he's playing well within the limits of his formidable technique.

"Passion Radar begins with an ominous opening passage and waves of dissonant harmony. Mitchell employs all manner of melodic devices to embellish this solid foundation of deep, throbbing chords and effectively builds up tension for the climax. "Equinocturne, which Mitchell opened with at the Pizza Express show, has an almost clairvoyant quality. He concentrates very much on the higher octaves, largely abandoning the previous theme of establishing a hard base of sound.

The next track, "Star Law, sees Mitchell experimenting with jovial, striding ideas in the left hand but offsetting this with starkly contrasting phrases on the right. The theme then changes to a more bluesy approach and we hear flashes of the blistering sheets of notes he is capable of producing, while the left hand provides stabby accompaniment. At the very end, the striding returns in a different form with use of the echo pedal and a sharp single note gives finality.

"The Envoy is clearer by comparison to Mitchell's earlier tracks, with a distinguishable structure of melody and improvisation. The rhythmic support for dashing right-hand runs stays fairly steady, with less veering avant-garde randomness. It's nice to find something a little easier to follow amidst this swirling maelstrom of abstract ideas—in fact, right at the end, Mitchell even adopts what some might regard as a vaguely conventional method of melodic phrasing.

It is interesting to note that Mitchell's other projects include such diversity as a Latin jazz duo with Cuban violinist Omar Puente and a post-fusion sextet called Panacea. Perhaps it was important for his creative realisation to contrast his work in groups with a solo piano recording. Seeing the material performed live, with the pianist introducing many unplanned amalgamations between pieces and considerably extending them, may well have contributed to my personal challenge in trying to unravel his concepts.

Equinox is very much a musical riddle and I wouldn't recommend it to casual jazz listeners. The one running theme is that Mitchell's playing states an unequivocal desire for this record to be difficult to categorise; it's not jazz, it's not minimalism, it's not contemporary classical. It contains traces of all the aforementioned along with many other different elements and represents a creative voyage of discovery for the composer.

Tracks: Agenda For Change; Passion Radar; Each Bird Must Sing; Equinocturne; Star-Law; Age of Reason; More Than Meets The Eye; We Must Learn; The Envoy; Priceless; There Is A Reason For Everything; Entanglement.

Agenda For Change; Passion Radar; Each Bird Must Sing; Equinocturne; Star-Law; Age of Reason; More Than Meets The Eye; We Must Learn; The Envoy; Priceless; There Is A Reason For Everything; Entanglement.