BY DOUG COLLETTE
February 23, 2011
Sign in to view read count 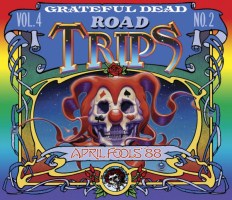 Adorned with some of the most colorful packaging in the Grateful Dead's Road Trips archive series, Vol. 4 No. 2: April Fools' '88Jerry Garcia's survival of a near fatal coma in 1986 and the Dead's penetration into mainstream culture in 1987 following its hit, "Touch of Grey."

This was also a year after the group collaborated with Bob Dylan, so it's not surprising four covers of his songs appear on these three discs. The convoluted lyrics of "Ballad of a Thin Man" allows Bob Weir to channel the relish he brings to his singing that sometimes, as on his own "Estimated Prophet," leads him to become grievously overwrought, while Garcia's vocal on "Knockin' On Heaven's Door" sounds as heartfelt as if he wrote it with composing partner Robert Hunter.

That fruitful a partnership created the elegiac ballad "To Lay Me Down," and there the tenderness in the voice of the titular leader of this band is as noticeable as the frenzied vigor with which he rips through his closing statement on "Deal." On both the April 1st show, here in its entirety, and the previous night, from which the whole second set and more appear, Garcia's presence inspires both his band mates and the audience: hardly a vocal or a solo of his begins that is not greeted with hearty acclamation from the Meadlowlands' audience in New Jersey.

Near the end of the '80s, the Grateful Dead was ascending to a pinnacle of performing comparable to its best days in the previous two decades. On disc two, the ambitious interweaving of vintage original material, as well as covers including Traffic's "Dear Mr. Fantasy" (sung so emotively by keyboardist Brent Mydland), benefits tremendously from the excellent recording originally overseen by engineer Dan Healy. In addition, Jeffrey Norman's HDCD mastering brings out the detail in the septet's musicianship, including the snappy interaction between drummers Bill Kreutzmann and Mickey Hart—and not just on pithy "Rhythm Devils"/Space" interval, but their locked in tandem work during "I Need A Miracle."

Vol. 4 No. 2: April Fools' '88 features the same uniformity of design as the rest of the series, but this package does allow for the inclusion of some great full-color photos of the Grateful Dead onstage, mirroring the enthusiasm in its playing on the CDs. The shot of bassist Phil Lesh, smiling broadly across the stage at Garcia, is as moving, in its own way, as the solemnity on Mydland's face, as he gazes fondly at his elder comrade, while the shot of the latter with his arm raised high above his head is more than a little noteworthy for a man not usually so demonstrative. Jerry Garcia's energy is as palpable in the photograph as in his singing and playing on this release.

CD1: Mississippi Half-Step Uptown Toodeloo; Jack Straw; To Lay Me Down; Ballad Of A Thin Man; When Push Comes To Shove; New Minglewood Blues; Cumberland Blues; Deal; When I Paint My Masterpiece; Let It Grow; Brokedown Palace. CD2: Scarlet Begonias; Fire On The Mountain; Samson and Delilah; Terrapin Station; Rhythm Devils; Space; Goin' Down The Road Feeling Bad; I Need A Miracle; Dear Mr. Fantasy; Hey Jude; All Along The Watchtower; Knockin' on Heaven's Door. CD3: China Cat Sunflower; I Know You Rider; Estimated Prophet; Eyes Of The World; Rhythm Devils; Space; The Other One; Wharf Rat; Throwing Stones; Not Fade Away.