By DOUG COLLETTE
September 30, 2017
Sign in to view read count 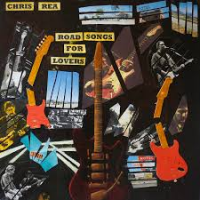 Far more successful in Europe than America, based on upwards of two dozen studio albums to his credit, Chris Rea perseveres as the unusually erudite and pragmatic musician that he is with Road Songs For Lovers. This Englishman's first studio album in six years chronicles his impressions of the world inside and outside his own head and heart in a most evocative manner: what begins as personal ultimately becomes universal.

All of which is equally vivid in the writing playing and record production on the dozen tracks that comprise the album. But then Rea's always paid close attention to the practical virtues of his albums, such as Auberge (Atco/East-West),so he takes as much pride in his guitar work as his songwriting tasks. As a result, for instance, Chris uses his instrument to skewer the necessary evil of "Money," while he barely hides a snide tone in his vocal. Wielding such multiple means of expression is key to the man's self-assured air and that attitude, in turn, only underscores his message(s).

The rough-hewn sound of the man's voice also suits his persona because it doesn't allow for merely facile expression of any emotion(s). The exception to that self-imposed rule is an acceptance of the way things are and/or the way they go, i.e. "Breaking Point." Most of the cuts that tracks that populate Road Songs For Lovers, exhibit such hard-earned wisdom and, like "Happy On The Road," proceed at a temperate pace: it's as if Chris Rea, who produced the album himself, deliberately set the tempo to allow his sentiments to sink in.

For this reason alone, what might sound like world-weariness, on "Nothing Left Behind" for instance, only sounds like the ruminations of a satisfied mind, right down to the near slow-motion twirl of Rea's slide guitar. The slightly middle-of-the-road air Neil Drinkwater's piano imparts to this title song is a nothing but a decoy because the song itself contains a wholly casual air reinforced by the one of Chris' voice. And the keyboardist's organ work on "Two Lost Souls" is as substantive as the rhythm section of bassist James Ahwai and drummer Martin Ditcham. Likewise, Robert Ahwai's rhythm guitar in support of Rea's lead there, becomes the rudder by which the band turns back and forth between stock rock changes and a more delicate melodic framework.

It is a mystery who plays those horns on that cut because there is no corresponding detail in the booklet-are they synthesized sounds?. Nor is their due credit for the percussion that appears to enrich "Moving On; " those are unseemly oversights by a bandleader as seasoned as Chris, particularly given the fact he took photos for the all the covers and the aforementioned CD insert and thought to includes all the lyrics as well.

That's a relatively small blemish, however, much less egregious than the lack of just one more upbeat track. A single extra rocker would enliven Road Songs For Lovers without sacrificing its plush warmth sounds: the sonics of this album, as applied to the tantalizing guitar solo of "Last Train" and throughout the album, are a reassuring blend of succor and salve for body, mind and soul.

Happy On The Road; Nothing Left Behind; Road Songs For Lovers; Money; Two Lost Souls; Rock My Soul; Moving On; The Road Ahead; Last Train; Angel Of Love; Breaking Point; Beautiful.