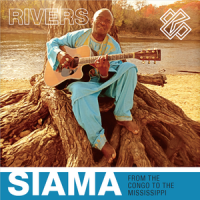 The Congo is located at the very heart of Africa, and has played the major contributory role of influencing musical trends throughout the region. Soukous originated in the 1950's when the impact of the Cuban rumba blended with traditional Congolese music. Incorporating the 3/2 clave rhythm, and adapting the piano montuno into guitar; it has two distinct parts, the slow complex rumba, which leads into the up-tempo sabene, and is based on the three chord structure.

Siama Matuzungidi is a guitarist who in his travels throughout Africa, played on hundreds of soukous sessions, and whose singular guitar style traveled the airwaves on numerous radio oriented hits. Now located in Minneapolis, he is a prolific griot who sings of tales and travels in Rivers -From the Congo to the Mississippi. Known artistically as Siama, he has blended with his new environment and with an array of diverse artists to produce an innovative approach to soukous.

The accompanying musicians on this production all have different backgrounds and each brings a distinct impression, though the compositions are all by Siama. The inclusion of Nirmala Rajasekar on vocals and veena, presents an Indian Carnatic tendency on "Mpevo," and "Maisha Mazuri," spirals into a spiritual sphere. Tenzin Ngawang on vocals, dranyen, and flute, provides an unusual Tibetan dimension on "Ndombolo," and the love song "Yolanda." Many of the songs were written with these new members in mind, though he does go back and cover some of his hits from back in the Congo. "Kueya," is definitive soukous, a resounding chorus interplay with the repetitious guitar pattern, as Siama does a vocal monologue forgiving his lost love.

The addition of Joe Savage on pedal steel guitar gives "Malembe," a stinging sensation, while the acoustical "Yele Yele," derives from African tribal celebrations asking for blessings. "Oyayeyo," tells of the bittersweet conflict of parental pride and sadness as children leave home, a feeling Sima knows well as he left home as a teenager to play his music. Before his arrival in the states, he had performed throughout Africa, with extended sojourns in Japan and Dubai.

Just as soukous music evolved from outside influences, so has Siama. He has accepted his global wandering as a destiny, and continues on the path he set for himself. Recently the beneficiary of several grants from Minnesota foundations, he was able to produce this record, and continues to progress artistically. He is recognized back in the Congo as a virtuoso soukous guitarist, and now has the opportunity to expand his horizons and spread his music.